An army of citizen scientists across the UK has provided scientists at the British Trust for Ornithology (BTO) with new insights into the nesting habits of the House Martin, arguably our closest nesting neighbour. 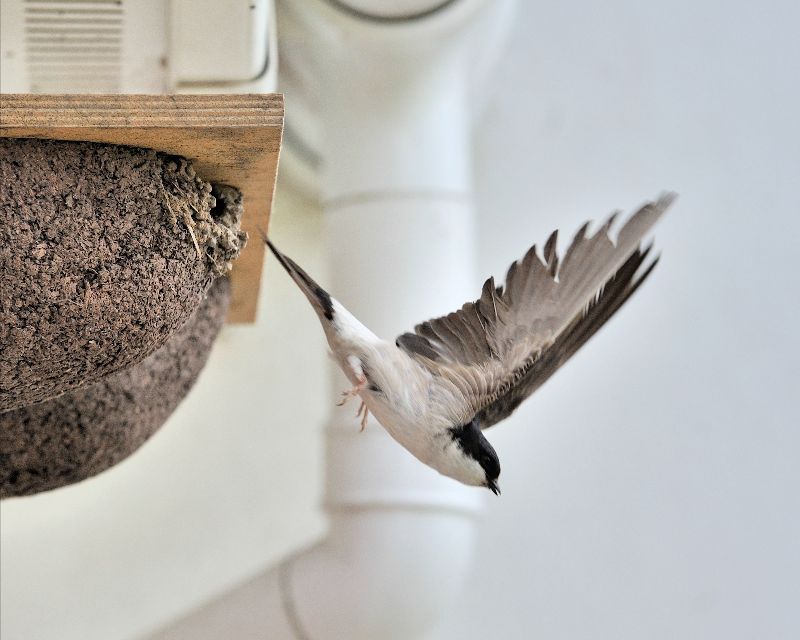 Over a two year period, members of the public across the UK were asked to help monitor the breeding behaviour of House Martins. The House Martin is a summer visitor to the UK that spends the winter months in sub-Saharan Africa, returning to build their cup-shaped nests under the eaves of buildings during April and May. During the last 25 years the House Martin has declined by 39% and is amber-listed as a bird of conservation concern but it is unclear what the drivers behind the decline might be.

Their findings were very interesting. House Martins arrived earlier in the east and began breeding earlier than birds in the west, possibly a benefit of drier weather in the east. Birds that used old nests from previous years or artificial nests had greater breeding success than those that built from scratch Substrate was also important. Birds that built nests on PVC as opposed to brick, concrete or wood had much lower breeding success – perhaps because nests were more likely to collapse on the PVC substrate.

Breeding House Martins did better in suburban settings and with the presence of freshwater. Although the amount of agricultural land had no influence, more young were produced by birds that bred close to livestock. Interestingly, there was no evidence of more young being produced in the north than in the south, despite the national trend showing a greater decline in House Martins in the south.

The study also reported the first triple brood attempts in the UK, whilst pairs of House Martins have been recorded undertaking three nesting attempts in a single summer further south in Europe it hadn’t previously been observed in the UK.

Dr Esther Kettel, lead author on the paper, said, “Thanks to the effort of the thousands of volunteers that took part in the BTO House Martin survey we now have a much better picture of what helps House Martins breed successfully, but there is still work to do.”

She added, “From our findings it is clear that one of the simplest ways to help House Martins in the short-term is to provide artificial nesting cups – this can save around ten days of nest building time, giving the martins that use them a head start on the breeding season.”

The full paper can be accessed here