Drones can be a source of disturbance to wintering waterbird flocks

Newly published research, carried out by the British Trust for Ornithology (BTO) in Scotland, shows that wintering waterbirds, such as ducks, geese, swans and wading birds can easily be scared into flight by drones. 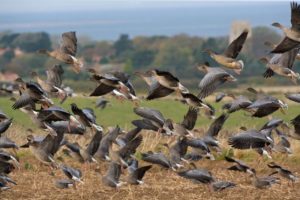 In recent years, drone technology has improved rapidly, while at the same time the drones themselves have become ever cheaper and produced in ever greater quantities. Drones are now being used for recreational photography, surveillance, ecological research, remote sensing and even to deliver packages. The mass proliferation of drones and the increasingly likelihood of commercial and recreational drone use taking place close to wildlife creates a new and potentially significant source of disturbance to wild birds.

Such disturbance, which could affect rare and protected species, causes birds to waste energy and reduces their feeding time. In extreme cases, birds might stop using an area altogether, and be forced to feed elsewhere, where feeding opportunities may be poorer or the risk of predation higher. This could be particularly harmful during the cold winter months, when vast numbers of waterbirds come to Britain from the Arctic to feed up before the breeding season.

BTO scientists flew a commercially available quadcopter drone towards waterbird flocks in coastal, freshwater and arable crop farmland habitats. While one researcher flew the drone at a standard speed and height towards the flock, another observed the flocks through a telescope to record any responses to the drone as it approached, including alarm calls, signs of heightened alert levels and taking flight.

The BTO team found that larger flocks were more likely to take flight than smaller flocks, and large flocks also took flight at a greater distance from the drone than smaller flocks. This is probably because the larger the flock, the more likely there is to be a sensitive individual present – in almost all cases, once one bird had responded to the drone, the rest of the flock followed.

The researchers also found that the habitat the birds were in had a strong effect on responses. Birds at inland lochs where there was already lots of human activity were very unlikely to respond to the drone, while birds at coastal sites were more likely to respond. Birds in arable farmland were particularly sensitive – flocks feeding in this habitat are probably most susceptible to disturbance because of the need to be on the lookout for predators.

Lead author, David Jarrett, said: “While we expected that the drone would cause large flocks to flush, we were surprised that birds hardly seemed to respond to the drone at all at those inland lochs where there was already lots of human activity taking place. Hopefully this research can be used to help inform guidance and regulations on drone use in proximity to wild birds.”

Britain hosts internationally important flocks of waterbirds outside the breeding season. While it has been thought that drones could be useful in monitoring their numbers, the disturbance caused by such monitoring would have to be carefully evaluated. If drone use were to become more frequent at important sites for our wintering waterbirds, and birds did not become accustomed to this novel form of disturbance, then the resulting increases in energy expenditure and stress would be likely to negatively affect their populations.

The full paper is published at 09:30 on Tuesday 1 September in the journal Bird Study and can be accessed here on that day. The work was generously funded by The Sound Approach.