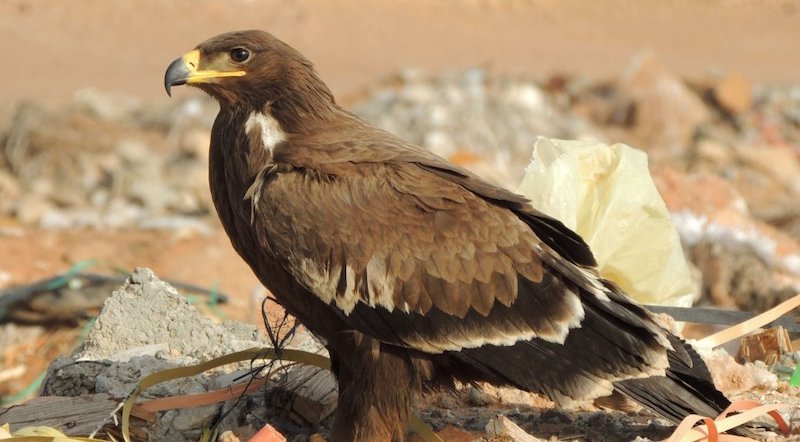 If you wanted to see 6,000 Endangered eagles, a rubbish dump might not be the first place you’d think of looking. But conservationists in Saudi Arabia are working to make these unlikely havens safe for the birds that call them home.

Nowadays, it is incredibly rare and mesmerising to catch a glimpse of the majestic Steppe Eagle Aquila nipalensis. This large, powerful bird of prey used to be a common sight in many countries, but has been tragically declining since 1997 – largely due to habitat loss – and since 2015 the species has been listed as Endangered. However, earlier this year, a few lucky conservationists got a sighting they didn’t expect when they found around 6,700 Steppe Eagles at two rubbish dumps near Riyadh, Saudi Arabia, scavenging on animal carcasses.

The adventure started when a team from the Environment Society of Oman (ESO) noticed that a large number of satellite-tagged Steppe Eagles were showing up near the town of Shaqra in central Saudi Arabia. Curious, ESO reached out to birders in Saudi Arabia asking for their help. Mischa Keijmel, Technical Manager at an engineering firm, happily obliged.

When the new recruit embarked on this journey, he had no idea of the bonanza he was about to stumble upon. He visited two rubbish dumps, one located about nine kilometres from the town of Shaqra, and another six and a half kilometres southwest of the town of Ushaiqer. Upon his arrival at the first dump, he noticed many eagles standing on pylons – posing a direct risk of electrocution. Keijmel described the surroundings as “slightly undulating, barren plains covered with small rocks and devoid of vegetation”  – an unlikely wildlife haven. “In this landscape, observations of large birds such as eagles can be made over several kilometres” says Keijmel, describing how he was able to get an accurate estimate of the number of eagles.

The final evaluation confirmed up to 6,000 Steppe Eagles at Ushaiqer alone, 60-70% of which were adults, and the rest juveniles. A further 1,200 were found at Shaqra. This is the largest gathering of this globally threatened species ever recorded anywhere in the world, and accounts for approximately 4.5-9% of the estimated global population. 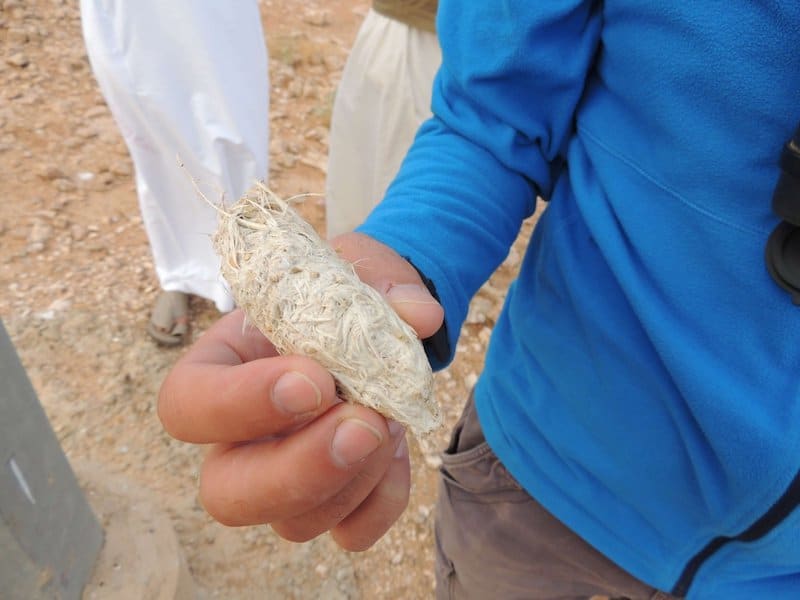 As luck would have it, at the same time an international team from the Egyptian Vulture New LIFE project, including the Saudi Wildlife Authority (SWA), BirdLife’s Middle East office, BSPB (BirdLife in Bulgaria), and RSCN (BirdLife in Jordan), was in the region to survey threats to the Egyptian Vulture Neophron percnopterus (Endangered) and other birds of prey. Hearing about this latest discovery, they added the Steppe Eagle to their priority list.

Their research highlighted electrocution and collision with power lines as serious threats. Fifteen dead Steppe Eagles were found along just two kilometres of power line at the entrance of the dump in Ushaiqer, and several dozen more were found along four kilometres of power line near a third dump at Al Qunfudhah city. Under some of the killer poles, the remains of seven or eight individuals were found. Black Kites Milvus migrans, Booted Eagles Hieraaetus pennatus, Corncrakes Crex crex and other bird species were also found among the victims. 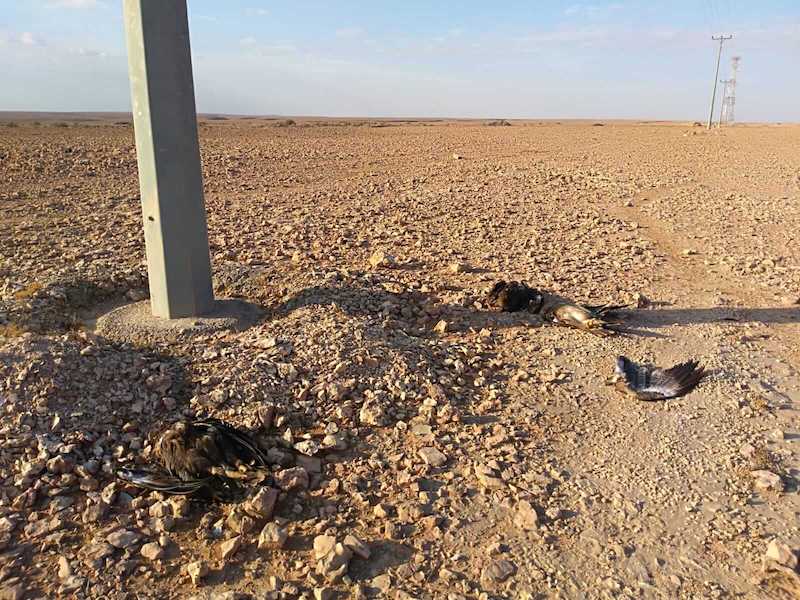 Furthermore, based on interviews with local people, the research team found that poisoned bait is commonly used to control predators such as feral dogs, wolves and hyenas. As if this wasn’t dangerous enough, drugs like diclofenac – a painkiller for livestock, but toxic to vultures and eagles – were widespread in almost every veterinary pharmacy visited by researchers. Since local people traditionally dispose of deceased livestock out in nature, this poses a serious threat to scavengers.

“Despite the surprise of finding such a high concentration of eagles, and the research being impromptu rather than planned, I think we all believe that electrocution and poisoning events could be killing a large number of eagles, as such events have been seen in other locations”, says Mike McGrady, a researcher for ESO.

However, despite these serious threats, there are also great opportunities for conservation and birdwatching – especially since such a huge concentration of eagles has the potential to generate popular interest in these areas. In November 2019, just after the expedition, the results were presented at an international workshop about Birds and Energy hosted by SWA in Riyadh. All attendees expressed their concern and agreed on the need for urgent actions to prevent further electrocution incidents, especially at major congregation sites.

“These findings highlight the utility of satellite tracking in discovering important sites for birds, and the benefits of international collaboration to identify and mitigate threats to migratory birds”, says Professor Mohammed Shobrak from SWA.