(Washington, D.C., February 14, 2020) The Commonwealth of Virginia has announced plans to help waterbirds displaced by construction on Hampton Roads’ South Island, which has been used by more than 20,000 birds as annual breeding habitat since the 1980s. American Bird Conservancy (ABC) applauds Governor Ralph Northam and the Virginia Secretary of Natural Resources for their emergency measures, which include the creation of alternative breeding habitat for this critically important waterbird colony. 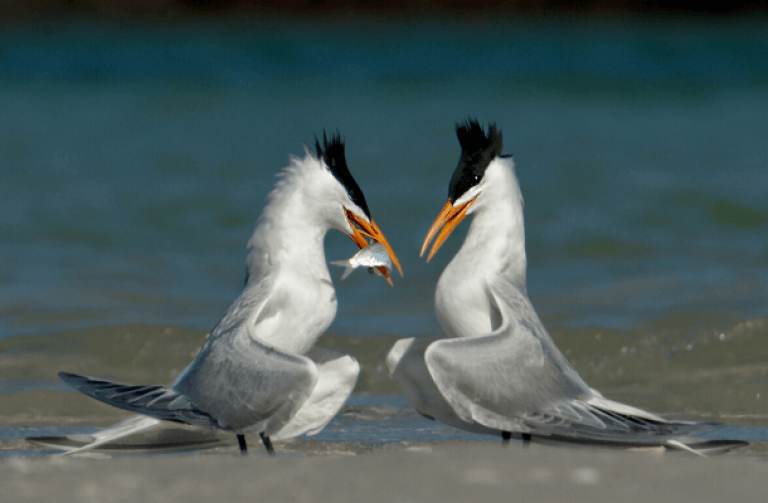 More than 20,000 waterbirds, including Royal Terns, have bred annually at Hampton Roads’ South Island since the 1980s. Photo by M.E. Parker/ Shutterstock

First, ABC is extremely grateful to the administration for proposing a set of measures designed to help migratory birds both in Hampton Roads and across Virginia. In particular, Virginia’s steps to create a new regulation to protect migratory birds from future industrial development will position the Commonwealth as a leader in bird conservation at a time when federal regulations to protect birds are being weakened.

Second, ABC welcomes the following package of specific measures designed to help Hampton Roads’ waterbird colony, which is the Commonwealth’s largest and includes many declining species:

“We’re optimistic that this plan will effectively provide immediate habitat for the birds to save the 2020 nesting season, as well as a net gain of habitat in the longer term,” said Mike Parr, President of American Bird Conservancy. “Many individuals and groups have participated in the effort to help the Hampton Roads bird colony. We’re grateful for their concern and support, and we look forward to continuing our work with the Commonwealth and other public and private partners to further benefit waterbirds nesting in Virginia and elsewhere.”