The Australian bushfires of late 2019 and early 2020 gave much cause for heartbreak and angst. With the smoke finally clearing, read about five affected bird species and the efforts underway to help bring them back from the brink. 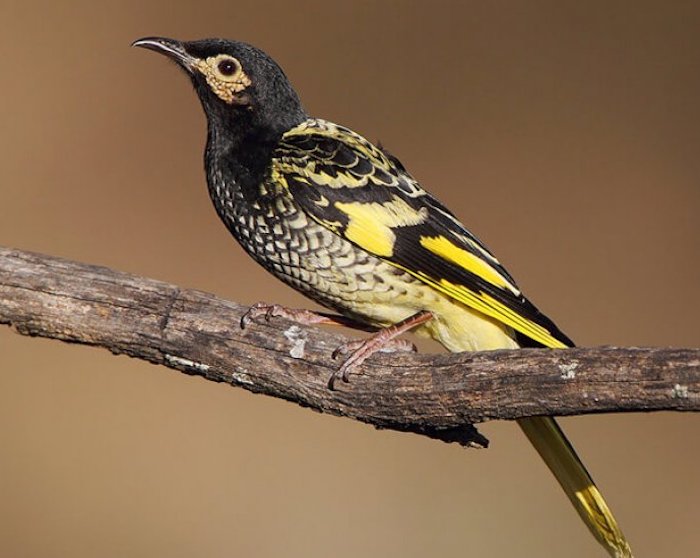 This Critically Endangered species is highly admired among birders for its distinctive lemon-yellow flecks that create an intricate stained-glass effect over the bird’s back, wings and breast. Although they won’t pass up the opportunity to snatch a tasty insect on the wing or a spider that strays too close, their main source of sustenance is the sweet nectar of blossoms, for which groups may travel hundreds of kilometres.

Over the past 30 years, drought and habitat loss have caused the species’ population to plummet: pre-bushfire numbers were estimated to be fewer than 250 birds in the wild. For a bird already on the brink, this crisis presents another serious hit in terms of both habitat loss and food availability, since such dry weather causes the eucalyptus trees to stop producing the nectar on which Regent Honeyeaters depend.

BirdLife Australia is looking to secure protection of critical breeding habitat for the Regent Honeyeater, as well as working with the government of New South Wales and Australian National University to do rapid assessments of impacts on key areas of habitat. 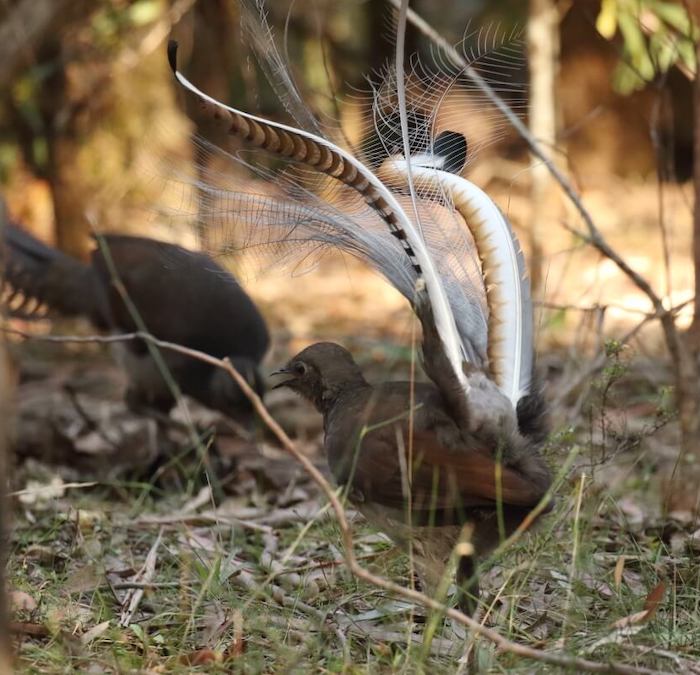 The Superb Lyrebird is known for its outstanding ability to mimic the sounds of its environment, whether natural or man-made, whilst flaunting its elaborate tail. The sounds of car alarms, chainsaws and even a camera shutter have all resounded convincingly from the beak of this species.

The effect of the bushfires on this species are particularly shocking for two reasons. Firstly, as a rainforest and wet forest dweller, it has come as a big surprise to discover this bird’s habitat ablaze. A warming climate has made characteristically wet biomes tinder-dry, and this habitat is not adapted to recover quickly from a burn. Secondly, with a Red List status of Least Concern, this bird has not been on the urgent agenda of BirdLife Australia, but the loss of over half of its habitat to the inferno demonstrates that no bird’s future should ever be assumed secure.

BirdLife Australia will assess lyrebird habitat and populations to determine whether the impact warrants a change of conservation status. They will also try to identify potential “climate refuges” and priority sites for protection, then ensure they are managed to reduce threats from feral cats and foxes. 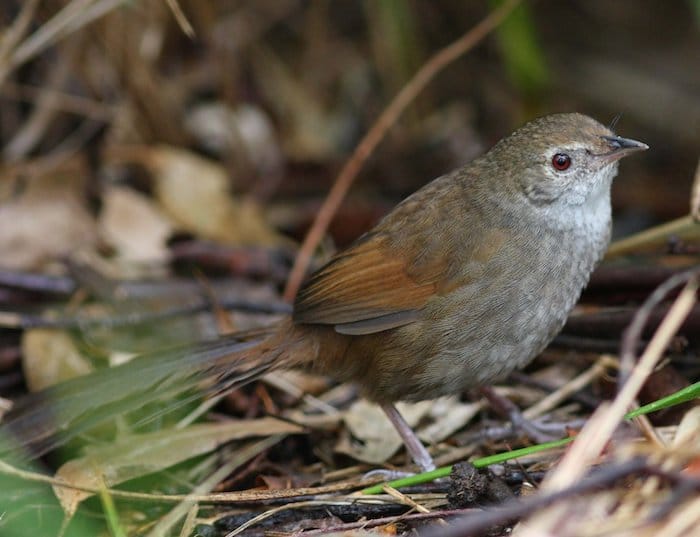 Mottled grey-brown with warm cinnamon patches on its wings, it may not be one of Australia’s more showy birds but it does well to blend into its scrubby surroundings, hidden from predators as it hops covertly along the floor foraging for insects and seeds. What it perhaps lacks in bold appearance it more than makes up for with a powerful and melodious voice, making it a species more commonly heard than seen.

The northern population lives in fire-prone habitat made up of tussocky grass and forest woodland: a huge worry, as there are possibly as few as 28 birds left here. When the bush catches fire, this bird will habitually evacuate its usual habitat and take refuge in nearby rainforest, but as the case of the lyrebird reveals, in the face of these exceptionally intense fires, this strategy is no longer always viable.

There is already much being done to protect this species, such as captive breeding and investigating how they can best benefit from controlled burns. In light of the fires, BirdLife Australia is seeking additional funding to increase captive breeding efforts, including the construction of new aviaries and exploring options for securing important habitat on private land. 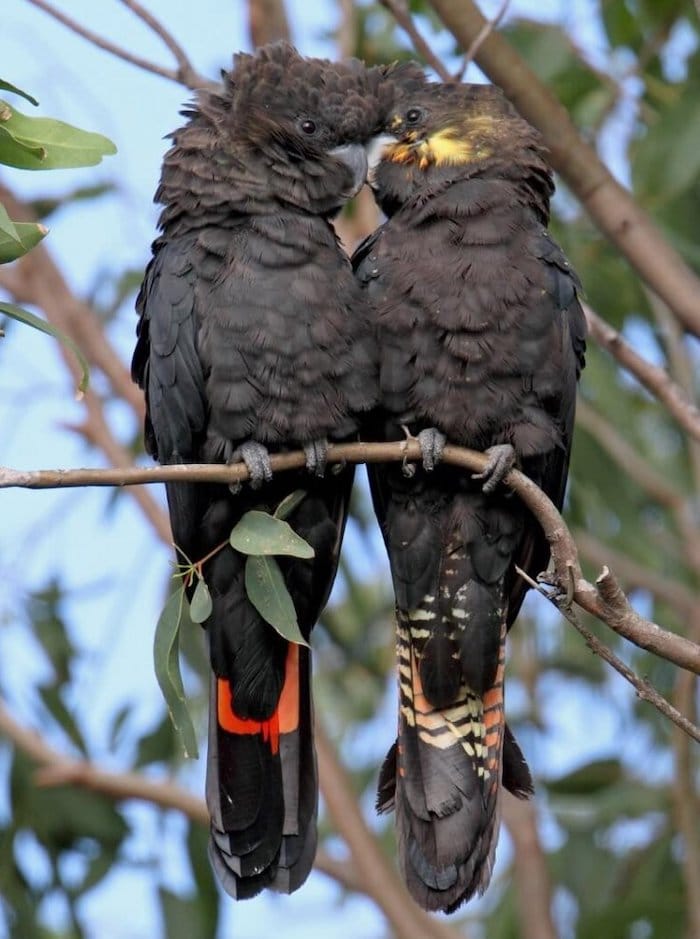 If, whilst walking through the forests of Eastern Australia, you find empty seed cones of the Drooping Sheoak tree raining down from above, it’s likely you’re stood beneath a feeding Glossy Black-cockatoo. So absorbed are they in stripping the seeds of their favourite food tree with their sharp bills, they are often quite approachable. Their heavy dependence on this tree, also known as the casuarina, has earnt them the local name ‘the Casuarina Cockatoo’.

Prior to the fires, the Kangaroo Island subspecies’ population was already of high conservation concern. In the 1990s, their population numbered as few as 150 individuals, but a dedicated rescue mission managed to raise it to about 400. Now, over 75% of this population’s habitat is estimated to have been wiped out by the fires along with the trees that they are so partial to, possibly undoing decades of intensive conservation action.

Thankfully, other associations are rallying round this bird to protect is and its habitat from further threat, allowing BirdLife Australia to dedicate support to some of the 16 other endemic subspecies on the island such as the Kangaroo Island Western Whipbird Psophodes nigrogularis and Shy Heathwren Calamanthus cautus. 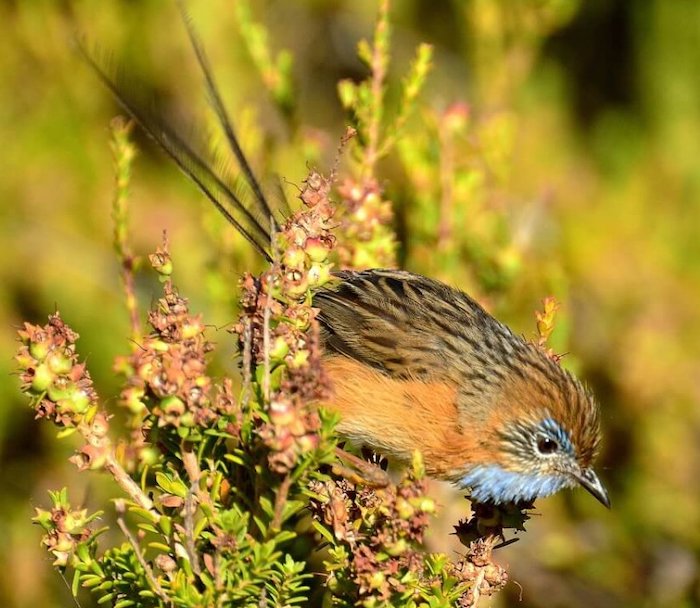 It seems ironic that this tiny little bird, found along much of Australia’s southern coastline, should be named after the country’s largest bird, the Common Emu Dromaius novaehollandiae. Its name alludes to the resemblance of its six long, wispy tail feathers to those of its gigantic cousin. Whilst both sexes possess the characteristic tail, the male’s statement powder-blue eyebrows and throat allow you to distinguish him from the females.

The population found on Kangaroo Island is thought to have lost over 80% of its habitat to the fires. This would warrant an uplisting of the Kangaroo Island sub-speices Stipiturus malachurus halmaturinus in the South Australian state government’s assessment from Near Threatened to Critically Endangered.

Once it was safe to do so, BirdLife Australia sent a team out to Kangaroo Island to conduct a rapid assessment of impacts, surveying both burnt and unburnt areas in order to form a recovery plan. They are also working to identify priority areas for control of feral cats and foxes, which are predators of the birds, and encouraging protection of remaining habitat.