Teetering on the edge of extinction due to demand for its prized ‘casque’, the Helmeted Hornbill now finds itself with a fighting chance of survival thanks to bolstered law enforcement and patrols of its dwindling forest habitat

Pairs of Helmeted Hornbills Rhinoplax vigil (Critically Endangered) rear just one chick at a time, so ensuring its safety is paramount. And that means investing in a strong, sturdy front door. When the female is ready to produce an egg, she seals herself inside her tree cavity nest, gluing shut the entrance with mud and fruit. Out of sight of predators, this is her safe haven: no harm can come to her and her (usually solitary) chick here. Encased inside, she waits as the male flits between fruit trees to find and bring back food. Around five months later, the time comes for the female to use her supersize bill to break free from her self-imposed prison, allowing the fledgling to take to the wing.

For millennia, this technique has been effective in ensuring the survival of this species. However, as is so often the case, human action is tipping the balance against their favour. A dramatic rise in poaching means that the mother hornbill’s haven becomes her tomb, as she waits for her next meal from a partner who will never return.

Even to get to this stage, Helmeted Hornbill pairs have to clear a big hurdle: finding a suitable nesting tree. The tree must have a cavity big enough for the adult female to raise her chick to fledge, with a ledge above that the male can perch on to drop fruit into a small opening in the nest. This sort of set-up is only found in the oldest, tallest trees of old growth forests – in other words, those that are becoming scarce since they are also the most valuable to loggers. 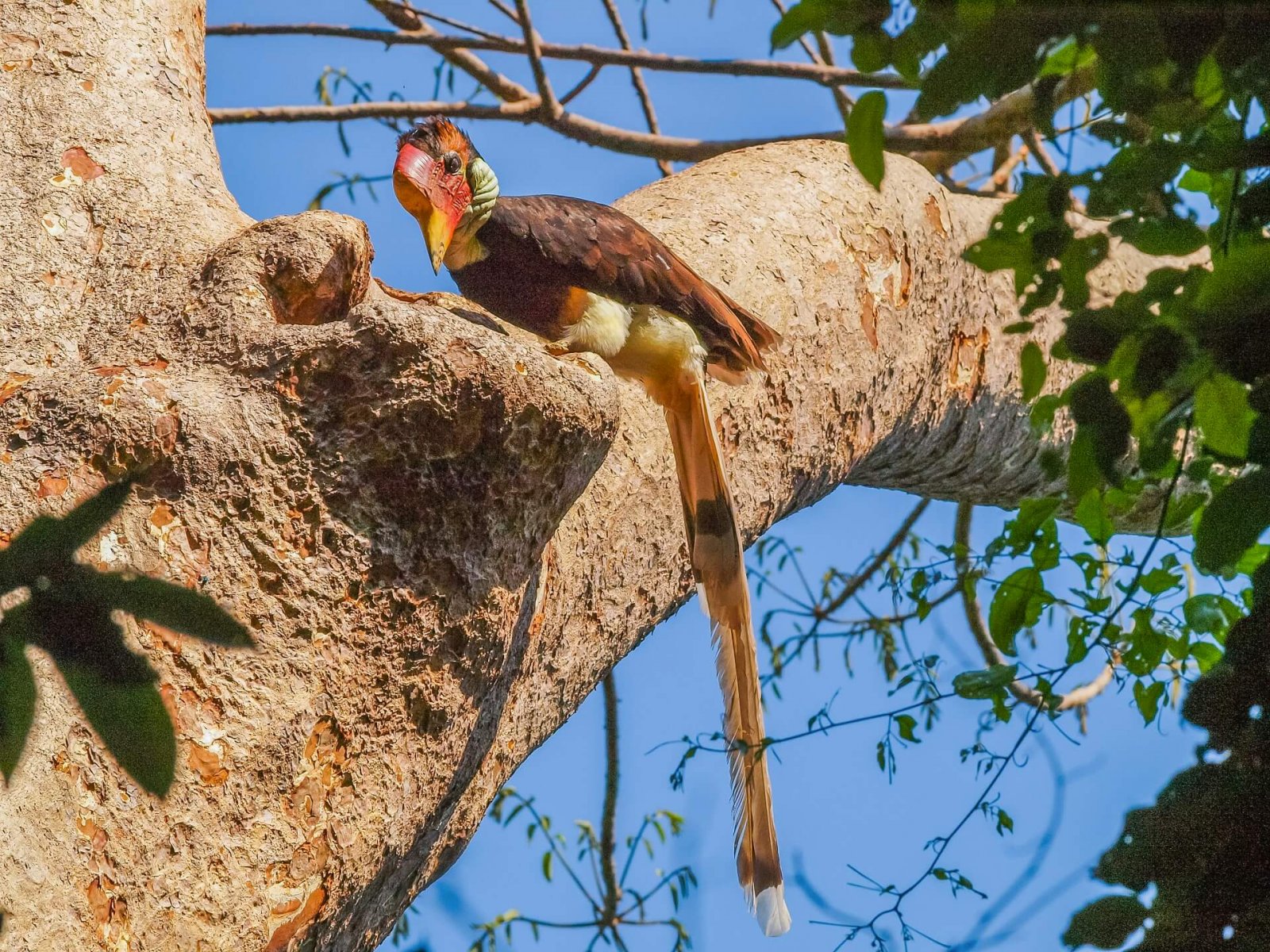 Food, too, is a precious resource, and the species is known to compete over access to foraging territory. Sometimes when a fig tree comes into fruit, a head-to-head battle ensues. Helmets ‘strapped’ on, the birds (usually males) charge at each other until they collide at their casques (the projections above their bills), with a deafening ‘clack’. After a series of blows, it’s believed that the winner is entitled to the first claim on the food.

But while the dwindling supply of fruit and nesting trees are two gradually increasing threats, they fail to explain why in 2015, the species made an extremely rare jump up the extinction risk ladder from Near Threatened to Critically Endangered. So what has gone wrong in the past ten years?

It comes back to that large casque on their forehead. In a twist of irony, their ‘helmet’ – a feature which in any human context is designed to protect – is their death warrant. Accounting for about 10% of the average 3kg that these massive birds weigh, and adorning both males and females, the Helmeted Hornbill’s casque is the only one of any hornbill species that is solid, and thus highly suited to carving.

Although people have been carving this material for ornamental purposes for millennia, there was no great cause for concern until 2012, when large seizures of smuggled casques revealed an explosive spike in demand. Three years later, the Helmeted Hornbill found itself one Red List category away from extinction. This is because casque carvings have become a status symbol among the rich in China – where it can sell for up to five times more than elephant ivory – though what the item says about its owner is in the eye of the beholder. 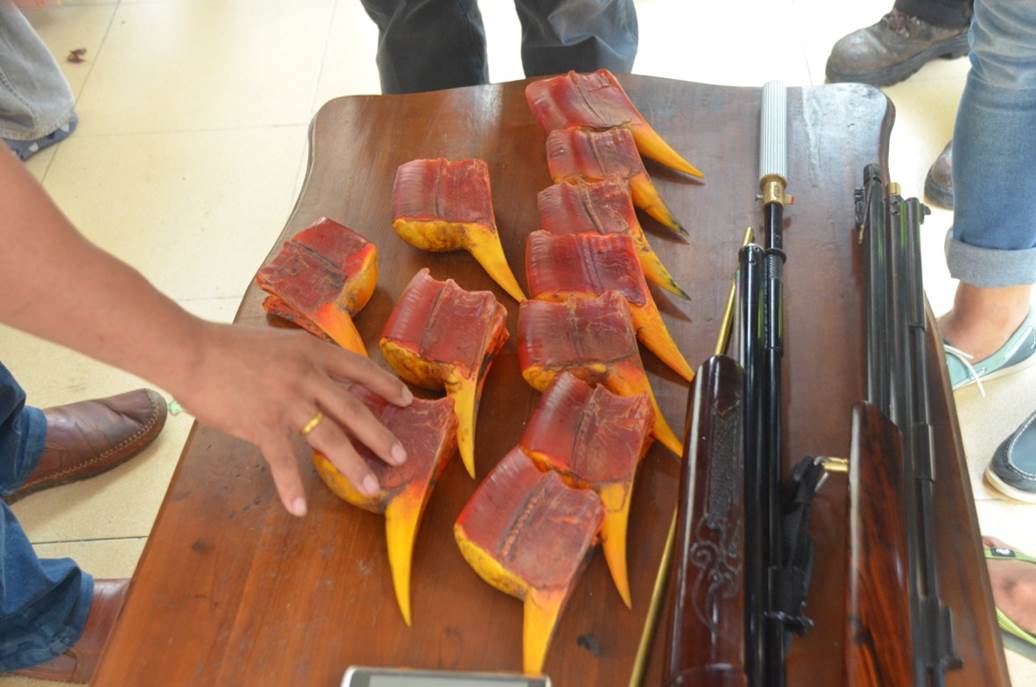 Back in the forest, poachers may trek for days in search of Helmeted Hornbills. Some mimic their characteristic ape-like laughing song in an attempt to lure them into sight. Finally, a large bird glides across the canopy with its long tail feathers streaming out behind and a silenced rifle is raised to shoot. Sometimes it’s a Helmeted Hornbill, sometimes it’s another hornbill – with such a prize to be gained, there’s no time or desire to consult the field guide. The most damaging scenario is when it’s a male provisioning for his mate and offspring during breeding season. One bird dead in the poacher’s hand, is worth two more dead in the nest.

The hotspot of poaching is in Indonesia, often orchestrated by international crime networks. It may also occur in the bordering Malaysian state of Sarawak but mercifully, there is little or no targeted poaching in the other range countries: Brunei, Myanmar and Thailand. Local communities in these countries mostly revere hornbills for their worth alive. In Myanmar, all hornbills are admired for their faithfulness (pairs form life-long bonds) and in Malaysia too, hornbills hold huge cultural significance.

To survey populations and deter poachers, some BirdLife Partners have set up nest monitoring and patrol schemes with local people. For some hunters, getting involved is simply a means to make the money needed to survive. When Malaysian Nature Society (MNS, BirdLife Partner) interviewed members of local communities, one ex-poacher said: “I stopped hunting wildlife (including hornbills), because the government gave me a more lucrative alternative: being a national park ranger.” In this way, these systems act as a double defence; we’re not only putting eyes and ears on the ground, but also pulling would-be hunters out of the chain. 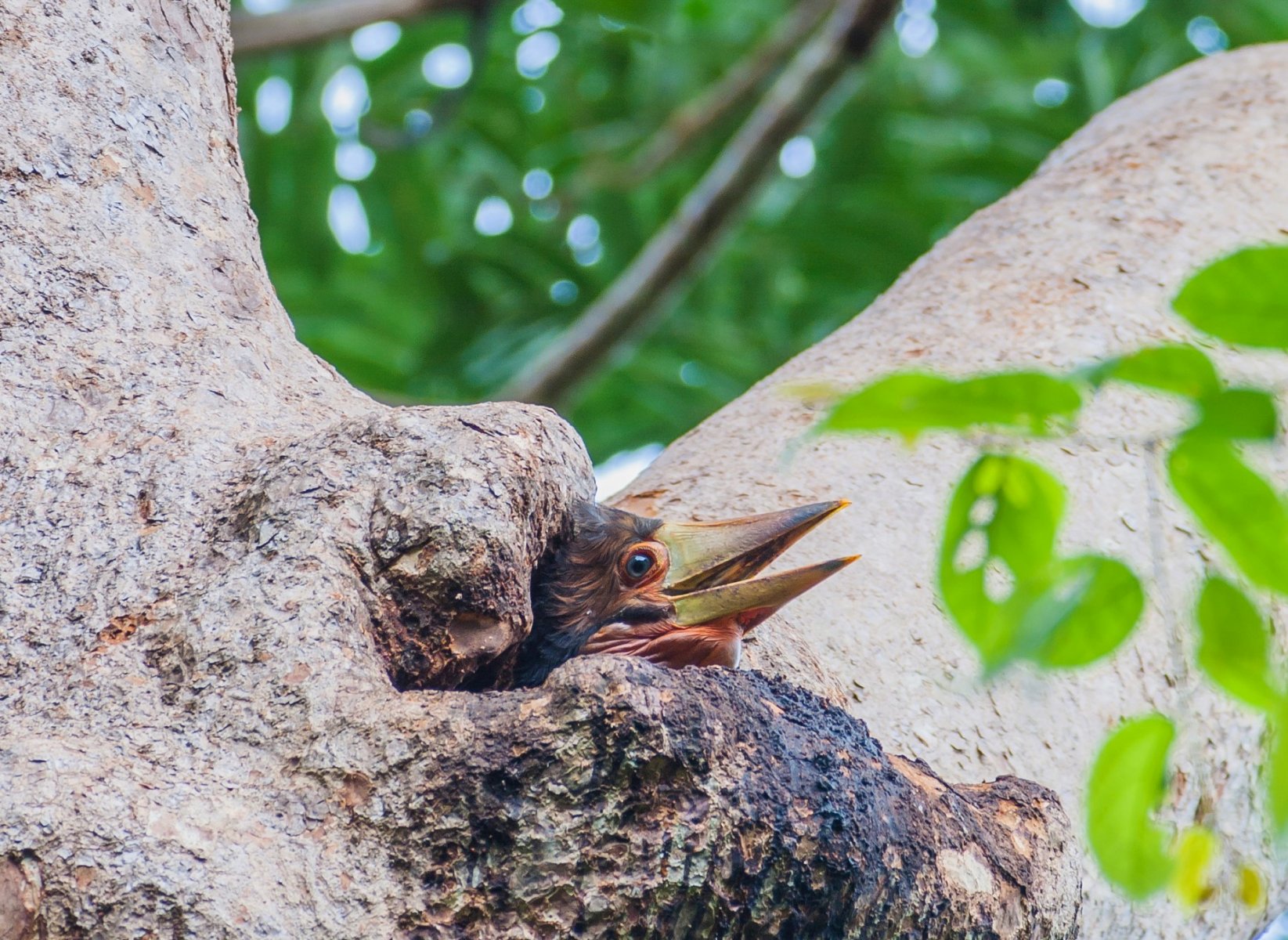 Rangers are now employed to guard nests and juveniles like this one © Sanjitpaal Singh / jitspics.com

Others are motivated to protect the hornbills because they recognise the ecological value of the birds. Acting as key seed dispersers, the birds’ relationship with the forest is actually interdependent. One MNS Hornbill Guardian explained his motivation: “No hornbills, no forests, no us. When hornbills are healthy, forests are healthy.”

“Combating poaching directly is important but not enough to save the Helmeted Hornbill”, says Anuj Jain, Preventing Extinctions Coordinator, BirdLife Asia. “One of our key approaches is protecting the hornbill’s strongholds from habitat loss, degradation and other human disturbances, whilst improving local community livelihoods.”

BirdLife is a member of the multi-organisational Helmeted Hornbill Working Group which, among other goals such as strengthening law enforcement and reducing demand, works to protect key areas where Helmeted Hornbills are found. Over the past two years, we have launched rapid field assessments from Myanmar to Borneo, and identified a number of new locations where the species is present. The next step is highlighting these areas to governments and convincing them to secure a new kind of ‘safe haven’ – areas large enough to support hornbill populations, where threats of both poaching and forest degradation are effectively mitigated.

This also allows us to get ahead of the game. Although casque poaching does not occur in all range states, history demonstrates how readily these activities can change tack. By securing safe havens across the Helmeted Hornbill’s range, BirdLife not only addresses the issue of habitat loss, but also sets up mechanisms to protect Helmeted Hornbills before poachers begin to arrive. Poachers entering forests, often operating through organised networks, have caused Helmeted Hornbill numbers to plummet, compounded by forest loss and their unique nesting behaviour. Creating these safe havens is essential to keep poachers out, to ensure provisioning males make it back to their nests and to keep Helmeted Hornbills out of the markets and into the only place they belong: the forests – and especially, the holes of old trees.