In late 2019, a team of scientists and conservationists undertook a mission to capture and fit tracking equipment to Madagascar Pond-herons. This ongoing study, the first of its kind on a global level, is building upon the knowledge of the species and will aid its conservation. 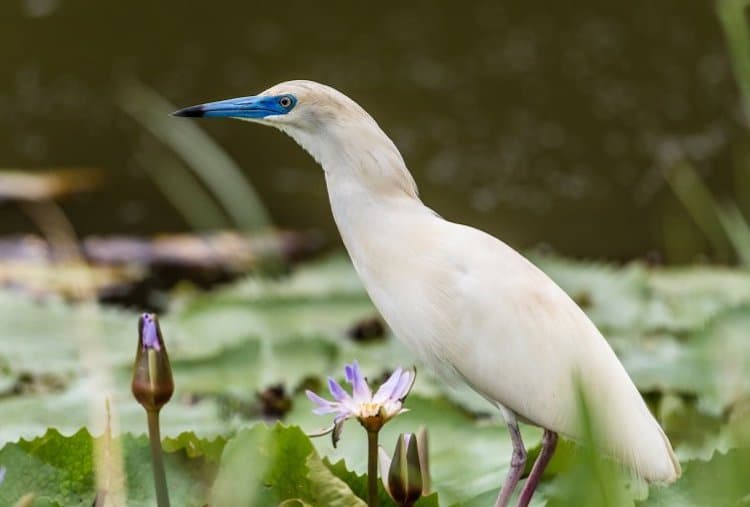 During the breeding season, the Madagascar Pond-heron has white plumage and a vivid blue beak © Gilles ADT

The Madagascar Pond-heron, Ardeola idae, is a small beige-brown heron striped with black, which during the breeding season has white plumage and a vivid blue beak. This very timid species breeds only on four islands in the world: Madagascar, Aldabra, Europa and Mayotte. Mayotte is the second most important breeding site in terms of numbers, with 182 pairs in 2018. The species is classed as “Endangered” on the IUCN global Red List and “Critically Endangered” on the French Red List. In Mayotte, the species is threatened by human disturbance, loss and degradation of wetland habitats where it feeds and nests, and by the poaching of chicks and eggs. The predation of eggs and young by rats is also suspected but remains unproven.

Currently, there is very little data available on the Madagascar Pond-heron and despite its unfavourable conservation status, few studies have been carried out on this species. The mission, undertaken at the end of 2019 and to be followed by further assignments in 2020 and 2021, aims to equip a total of 15 birds with GPS transmitters in order to improve ecological knowledge of the species. The research hopes to identify: specific feeding areas which require better management; whether individuals from the same colony all feed in the same location; whether individuals stick to the same feeding sites over time; the size of the Madagascar Pond-heron’s territory during the breeding season; and where the birds go outside of their breeding season.

The research is being carried out by The Association for the Study and Protection of Birds in Mayotte (Groupe d’Etudes et de Protection des Oiseaux de Mayotte, GEPOMAY), as part of the European LIFE BIODIV’OM program, coordinated by our French Partner, (Ligue pour la Protection des Oiseaux, LPO). In order to ensure its success, GEPOMAY called upon a team of specialists to join them in Mayotte: Alexandre Laubin, a licensed bird ringer from LPO with prior experience working with this species; brothers Loïc and Pierrick Marion who have been ringing birds (including herons) together for roughly fifty years in difficult environments; and  Jan Van der Winden, a Dutch researcher and bird ringer with considerable experience of capturing wetland birds and fitting them with harnessed GPS trackers. 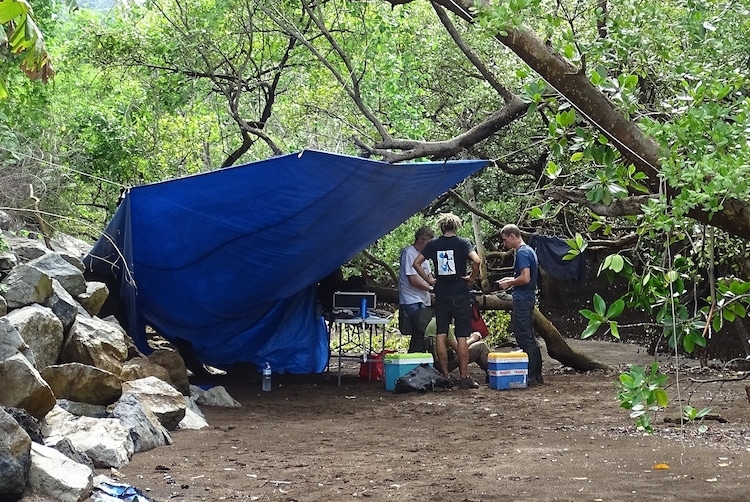 Some of the team on site in Mayotte © Pierrick Marion

Madagascar Pond-herons breed in Mayotte, building their nests in the tops of mangrove trees and in order to equip them with tracking devices, the team had to capture a number of individuals. First, GEPOMAY and the team of experts carried out substantial work in advance of the capture mission in order to test the equipment in real conditions and ensure its technical feasibility. This preparatory phase made it possible to see how the species reacted to the devices and therefore improve their capturing technique. Once they were ready to put these methods into practice, the birds were captured in heronries found in the Ironi Bé and Chiconi mangroves.

Each captured individual was fitted with a uniquely coded metal ring. Biometric measurements were taken (such as the weight, beak length and wing length) and then the bird was equipped with a GPS tracker held in place by a harness before being immediately released. This equipment, which includes a solar panel to recharge the battery of the GPS, weighs under five grams – less than 3% of the total weight of the bird.

Thanks to the efforts of the experts on this delicate mission, its objectives have been achieved. During this first mission to ring Madagascar Pond-herons in Mayotte, six individuals were successfully equipped with trackers in eleven days. The first attempts to collect GPS data using antennae have begun, and information on the movements of some individuals has already been received. Following this success, further capture missions will be scheduled over the coming years.

The Association for the Study and Protection of Birds in Mayotte (Groupe d’Etudes et de Protection des Oiseaux de Mayotte, GEPOMAY) has been carrying out monitoring programmes since 2010 in order to increase understanding of the population and phenology of the Madagascar Pond-heron in Mayotte. The association also coordinates a national action plan for the species (2019−2023) and in 2018 incorporated a European programme, Life BIODIV’OM, which is managed nationally by the LPO and in Mayotte by GEPOMAY. The aim of this programme is to reduce the threats faced by the species: to combat poaching, to increase public awareness in order to reduce human disturbance, and to restore and protect its habitats.

Life BIODIV’OM is a European programme, 60% funded by the European Union and coordinated by the LPO. Launched in September 2018 for a period of five years in five French overseas territories, its main objectives are to improve the population status of three Endangered species of birds (the Madagascar-Pond-heron in Mayotte, the Tuit-tuit in Reunion island, and the White-breasted thrasher in Martinique), two species of grouper fish (the Atlantic Goliath grouper in Guyana and Saint-Martin, and the Nassau grouper in Saint-Martin), and to protect a threatened habitat type – the Savannahs of French Guyana.