Lilacine Amazon’s future looking up, thanks to conservation commitment by Ecuadorian community 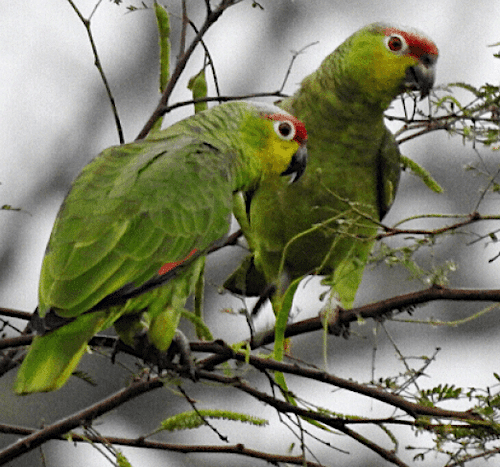 Roosting sites for the Endangered Lilacine Amazon are being protected in a new reserve. Photo by Michael Moens, Fundación Jocotoco

(Washington, D.C., November 21, 2019) In a bid to prevent the extinction of the Lilacine Amazon – a colorful parrot found only in western Ecuador – Fundación Jocotoco has established a new protected reserve, with support from American Bird Conservancy (ABC) and Rainforest Trust. The Las Balsas Communal Reserve also protects habitat for the Great Green Macaw. Each of these species numbers fewer than 2,500 and is listed as Endangered on the IUCN Red List.

The Lilacine Amazon was recently recognized as a species, differentiated from the more-widespread Red-lored Amazon by a less-striking head pattern and a dark (not two-toned) bill.

Protection of Lilacine Amazon roosting sites is of primary importance, since these birds congregate at communal roosts at night and fan out during the day to forage in the surrounding countryside. This behavior led to identification of the 209 acres that will be protected in the new reserve. As of November 20, 32 acres are officially protected, with the rest soon to follow.

“These 209 acres are crucial to protect the largest population of this endangered parrot,” says Dr. Martin Schaefer, CEO of Fundación Jocotoco. “We believe that more than a quarter of the Lilacine Amazon’s total population roosts in the new reserve, in close proximity to the Las Balsas community,” adds Dr. Michael Moens, Conservation Director of Fundación Jocotoco. “We’re grateful to the community for granting us a 99-year lease agreement on this land.”

The lease agreement with Las Balsas will ensure that the carob trees used by 500 to 1,000 roosting birds will be protected from charcoal production and agricultural clearing, two pervasive threats faced by western Ecuador’s lowland dry forest.

“This reserve is a great first step,” said Wendy Willis, Deputy Director of International Programs for ABC. “But we need to do more if we’re going to save the Lilacine Amazon. People in these communities need real economic opportunities as an incentive to conserve their land.”

To address these needs, Fundación Jocotoco is exploring sustainable ways to create more products from the community’s carob trees and to address the most serious environmental issues. The partners are also addressing another threat to the species: trafficking for the pet trade.

“Coastal Ecuadorian residents frequently capture the Lilacine Amazon to keep as a pet,” says ABC’s Willis. “It broke my heart to see one in captivity during a recent work trip to Ecuador.”

“Protecting roosting habitat for the Lilacine Amazon is helping to give this striking bird species a new future,” said Mark Gruin, Rainforest Trust’s Acting CEO. “The combination of land protection and community outreach will ensure this project’s continued success.”

The Las Balsas Communal Reserve is the 14th established in Ecuador by Fundación Jocotoco. It protects countless threatened species, such as the Critically Endangered Ecuadorian White-fronted Capuchin monkey and many bird species endemic to the region.