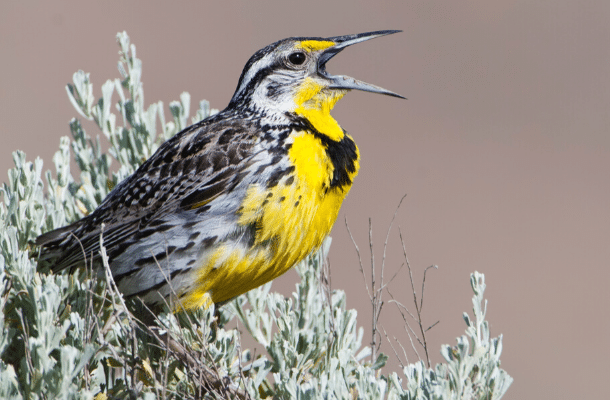 Populations of U.S. and Canadian birds, including Western Meadowlarks, have declined by almost 3 billion since 1970. The new rule-making announced today by the Department of the Interior is a step in the wrong direction, worsening instead of addressing this crisis. Photo by Tim Zurowski/Shutterstock

(Washington, D.C., January 30, 2020) The Administration today proposed a new federal regulation that will further weaken the Migratory Bird Treaty Act (MBTA), a landmark law that for decades has protected and helped to restore and maintain populations of many bird species, from the Great Egret and Wood Duck to myriad songbirds. The proposed rulemaking by the Department of the Interior seeks to codify a legal opinion (Solicitor’s Opinion M-37050, or the “M Opinion”) that has ended all enforcement against the predictable and preventable killing of migratory birds from commercial activities. The changes fundamentally weaken the 101-year-old MBTA.

“This rulemaking is another setback for birds cherished by millions of Americans at a time when many migratory birds are undergoing precipitous declines,” said Steve Holmer, American Bird Conservancy (ABC) Vice President of Policy. “We urge all citizens to speak out against this harmful policy change and ask that the law be strengthened to reverse the decline of migratorpy bird populations.”

“Decline of the North American Avifauna,” a new study published in September 2019 in the journal Science, reveals that since 1970, bird populations in the United States and Canada have declined by 29 percent, or almost 3 billion birds, signaling a widespread ecological crisis. The results show tremendous losses across diverse groups of birds and habitats — from iconic songbirds such as meadowlarks to long-distance migrants such as swallows and backyard birds including sparrows.

“To respond to the bird crisis, we need to strengthen protections for birds. This rule is a major step in the wrong direction,” said Holmer.

The Act’s prohibition on the killing or “taking” of migratory birds has long been understood to extend to “incidental take” — meaning unintentional but predictable killing of birds from threats such as open oil pits that lure and trap birds and tall towers and powerlines responsible for many bird collisions. By issuing the M Opinion in December 2017, the Administration abruptly reversed decades of government policy and practice — by both Democratic and Republican administrations — on the implementation and enforcement of the MBTA.

The risk of liability under the MBTA has long provided the oil and gas industry, wind energy development companies, and power transmission line operators with an incentive to work with the U.S. Fish and Wildlife Service to minimize bird deaths. For example, in an effort to protect migratory birds and bats, and to avoid potential MBTA liability, the communications tower and powerline industries have developed effective best management practices. The Administration’s new policy eliminates this incentive to minimize and mitigate impacts of industries’ activities on migratory birds.

“The MBTA, in its previous form, was responsible for steady progress in reducing sources of bird mortality. Best management practices, like covering oil pits with screens, put little burden on industry but prevented many needless bird deaths,” said Holmer. “In practice, enforcement of the MBTA has only occurred in a few instances when companies failed to adopt accepted industry best practices — and ignored government cautions and requests for mitigation.”

Conservationists have proposed to resolve this problem by creating a migratory bird incidental take permitting system. Agreed-upon best management practices would be the basis for a permit and would provide industry with greater certainty and a level playing field where all players would be required to meet the same conservation standards. The Migratory Bird Protection Act (H.R. 5552), or MBPA, introduced on January 8 by Rep. Alan Lowenthal and 18 bipartisan original co-sponsors, would meet this need.

“The MBPA provides an excellent framework to start preventing bird mortality by applying best management practices and steps to mitigate inevitable impacts,” said Holmer. “The bill establishes a process to develop general incidental take permits for industrial sectors that cause significant mortality, and where best management practices have already been developed and proven effective.

“Given today’s rule to further weaken the Migratory Bird Treaty Act, the need for this new legislation becomes even more critical.” Concerned citizens can support this legislation by signing ABC’s action alert.

ABC, with other conservation groups, is engaged in legal action to oppose these efforts to compromise the MBTA.