Without immediate action, at least 20,000 migratory birds will be homeless this spring thanks to the Commonwealth of Virginia’s decision to pave Hampton Roads’ South Island without creating alternative habitat for its largest waterbird colony. We’re calling on Virginia officials to start building a new island for the birds now. 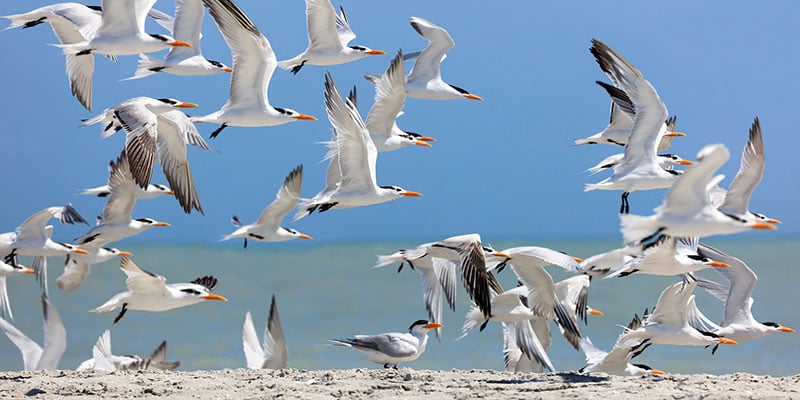 (Washington, D.C., January 14, 2020) Without immediate action, at least 20,000 migratory birds will be homeless this spring thanks to the Commonwealth of Virginia’s decision to pave Hampton Roads’ South Island without creating alternative habitat for the state’s largest waterbird colony. American Bird Conservancy (ABC) is calling on Virginia officials to start building an island for the birds now.

(ABC encourages all concerned citizens to speak out. Please see our action alert to send an urgent letter to the Virginia Governor.)

South Island has been home to a thriving colony of Royal Terns, Sandwich Terns, Black Skimmers, several species of gull, and Gull-billed Terns — a species listed as Threatened in Virginia — since the 1980s. But the island was paved in late 2019 to stage construction equipment for the multibillion-dollar Hampton Roads Bridge-Tunnel expansion project, which will add additional lanes to alleviate traffic congestion.

“To be clear, bird advocates are not arguing against the much-needed tunnel expansion,” said ABC President Mike Parr in a Washington Post Opinion piece. “All we want is for the state to build an alternate island with dredge spoil — material that is already widely available nearby. The cost of creating alternate habitat for the colony is estimated at about 0.2 percent of the project’s overall construction cost.”

Virginia officials have stated that they are unable to build such an island because of bureaucratic hurdles, including the federal government’s weakening of the Migratory Bird Treaty Act (MBTA); they claim that under the diluted MBTA rules, they cannot require developers to mitigate the impacts of their actions. While ABC, along with other bird groups and eight states, is suing the Administration over the weakening of the MBTA, there is “nothing that prevents Virginia from acting voluntarily to protect the birds,” said Parr.

In addition, Virginia appears to be on a collision course with federal law. It is true that unintentional but predictable harm to birds, such as the paving of the island, is now controversially allowed under the federal legal interpretation of the MBTA. However, Virginia officials stated in a June 2018 letter to the U.S. Fish and Wildlife Service that they plan to relocate any active nests they find on the island. This is equivalent to destroying the nests — which continues to require a permit under the MBTA.

“We have submitted several Freedom of Information Act (FOIA) requests to Virginia agencies, and so far there’s no evidence they have applied for any permits at all,” said Parr. “They need to, or they will be in violation of federal law. Those permits could still require Virginia to mitigate the harm to the birds.”

Virginia officials have also complained of the difficulties of obtaining approvals for building a new island from the National Oceanic and Atmospheric Administration (NOAA). There is no evidence that the Commonwealth has attempted to obtain such approvals, however. “The ‘essential fish habitat’ in the area that could trigger NOAA permitting applies only to four species of fish that range from New England to the Carolinas or Florida. How can a tiny island for birds — no more than a few acres — really impact these fish species that have ranges across tens of thousands of square miles of ocean?” asked Parr.

American Bird Conservancy wrote to Virginia officials in October and December to request a meeting to discuss the project and its mitigation, but has received no response.

If no alternate habitat is created, the birds that normally nest on the island are unlikely to find a place to breed this year or in subsequent years, and this will likely cause a long-term decline in their populations.

“Governor Northam has stated that he’d like to leave a strong environmental legacy. Unfortunately, with the Hampton Roads tunnel, Virginia is sending a different message. And while the situation in Virginia focuses on just one project, such decisions are happening all over the U.S. on a regular basis — and contributing to a huge loss of birds in the United States and Canada.

“Virginia is setting a terrible precedent for ignoring harm certain to be inflicted on birds,” Parr continued. “As the study published in September in Science told us, we’ve lost 3 billion birds since 1970. But it’s not too late. We’re informing the Commonwealth of Virginia that these birds need our help. Please don’t allow bureaucracy to get in the way. Build an island for the terns — now.”

If you would like to support ABC’s efforts, please visit: https://abcbirds.org/build-the-island/