The race to save the Santa Cruz Ground-dove

When a hundred Endangered doves were illegally captured from the wild, conservationists rushed to liberate them. But where do you release a bird when its last wild refuge is a dangerous active volcano? BirdLife’s Nigel Collar recounts how the effort united the conservation world. 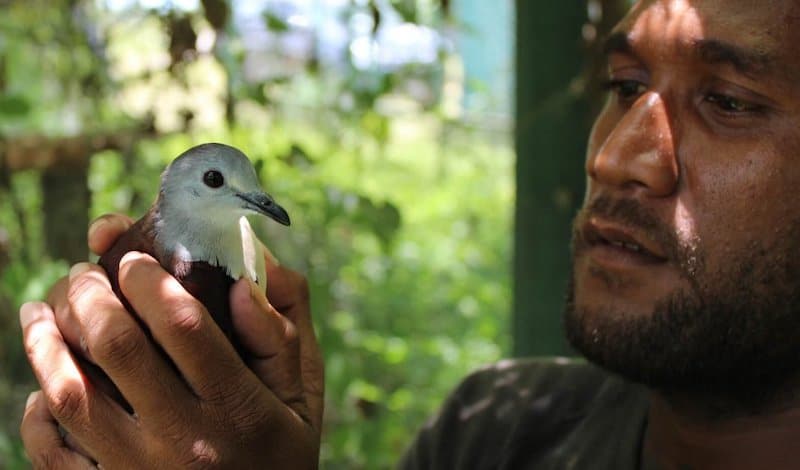 ‘Might you know of anyone who would be interested in the adventure of a lifetime to save a species?’ This is not the kind of question that often gets asked in emails between colleagues in different organisations. But on 27 October 2017, Rick Passaro of the Rainforest Trust briefed me on the plight of the Santa Cruz Ground-dove Alepocoenas sanctaecrucis (Endangered) in an email with the subject line: ‘Catastrophe in The Solomon Islands! Help?’

The Santa Cruz Ground-dove (locally called Vakavakatia) is endemic to the western Pacific Ocean, taking its name from the place where it was first found: the Santa Cruz Islands, part of the far-flung south-eastern Solomons. Within these islands, it is known to inhabit Utapua, where it is now probably extinct owing to deforestation and invasive predators, and Tinakula: a tiny, uninhabited, predator-free oceanic volcanic cone. It has also been found about 400 km to the south on Santo, the largest island in the Vanuatu archipelago, but reports there have only ever been of one or two birds – and introduced rats, cats, pigs and dogs are widespread. Tinakula is therefore a crucial final stronghold for the species.

Rick had just seen an appeal on Facebook by Chris Bone of OceansWatch, a contractee of the Rainforest Trust. Although legally protected in the Solomons, a large number of Santa Cruz Ground-doves had been trapped on Tinakula for export to the Middle East, but the shipment had been blocked at Honiara, the national capital on Guadalcanal. The conditions in which they were being kept were dangerously unhealthy, so Chris and Australia-based environmental consultant Ray Pierce were urgently seeking someone with bird-keeping skills to fly out to the Solomons and take care of them. 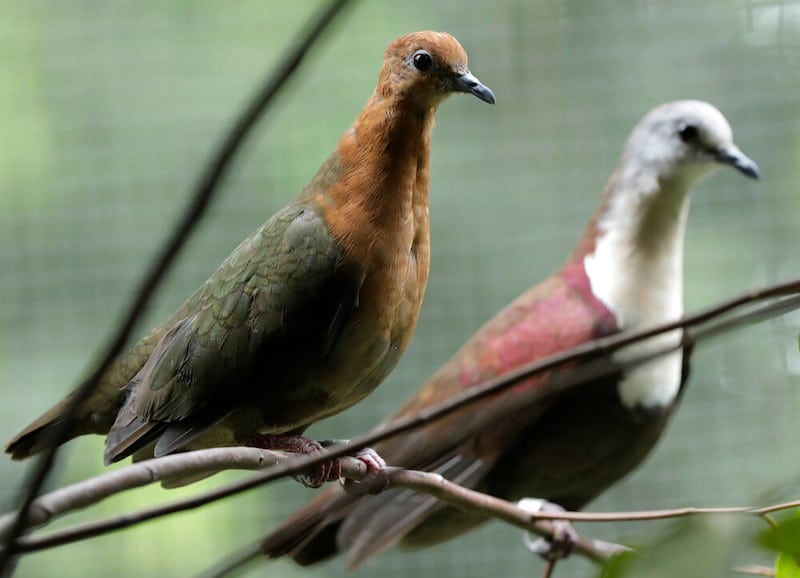 In the 2016/17 class of Cambridge University’s M.Phil. course in Conservation Leadership, there was a young Welshman with a huge interest in birds and a ten-year history as a bird-keeper in various parks in the UK. Joe Wood had finished his degree with a distinction, but unforeseen political developments had prevented him from taking up a post at an internationally prestigious zoo. I rang him – ‘adventure of a lifetime?’ – and he said yes at once.

The European Association of Zoos and Aquaria (EAZA) created an email list of dove experts to serve as a support group, including Duncan Bolton, curator of birds at Birdworld, UK, and Luis Neves, Director of Zoology at Wildlife Reserves Singapore (WRS). But where to find the money to get Joe on a plane and keep him going until the birds were properly secured? The Mohamed bin Zayed (MbZ) Species Conservation Fund was, it happened, just closing for applications in its four-monthly cycle, and Nicolas Heard, its director, encouraged a last-minute bid for £5,000. The request went in at 11pm on 31 October, and the next morning I got my second yes. Just over a week after Rick’s email arrived, Joe, under contract to BirdLife, boarded a plane for the 50-hour journey to Honiara.

His first task was a major challenge. Not one, but two shipments proved to have been blocked – but the birds had not been confiscated. To persuade the dealers holding them to give them up was a major face-to-face negotiation over several weeks. Meanwhile, Joe started searching for a place to accommodate them, working with Joe Horokou and Josef Hurutarau from the Environment and Conservation Division (ECD) of the Solomons’ Ministry of the Environment, Climate Change, Disaster Management and Meteorology. 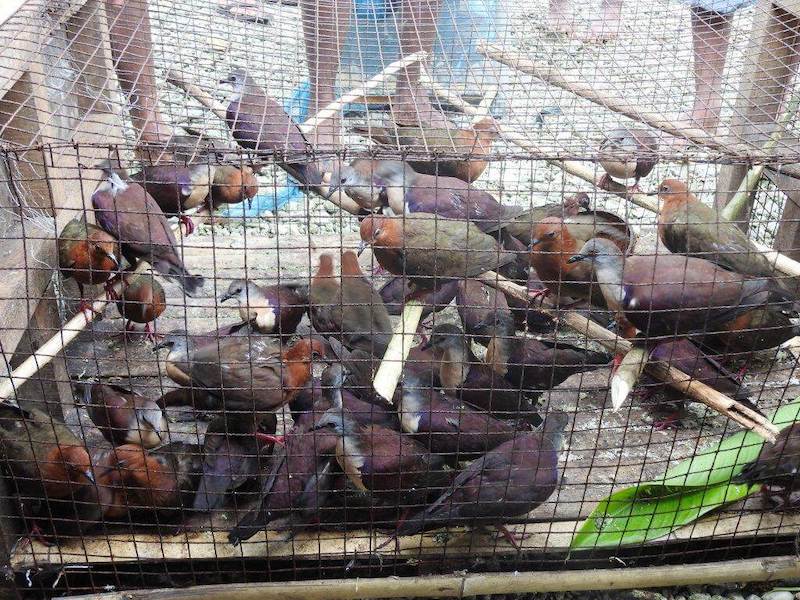 Caged doves held at Honiara, before their rescue by Joe Wood © Chris Bone

Another government department – Agriculture – agreed to convert a disused plant shade house near Honiara airport to a set of aviaries for the 111 rescued doves. The rescue mission received extra funding from Birdworld, BirdLife, Leipzig Zoo, Berlin Zoo and Toledo Zoo, USA. Joe received an invaluable week of assistance by Ivan Choo from WRS’s Jurong Bird Park and further support from local enthusiast Kellington Simeon, expat volunteer vet Sripad Sosale and birdkeeper Dean Jakings from Auckland Zoo, New Zealand. By the end of 2017, all birds were ringed and in good health.

Meanwhile, it had emerged that an earlier shipment of 25 doves, which could only have come from Tinakula, had gone to a pigeon fancier in Qatar. So how many might be left on the island? Should the priority be to put the birds back as soon as possible? Ray Pierce, funded by the Critical Ecosystem Partnership Fund (CEPF), had already established that there were ‘in the order of 400-600 birds’ on Tinakula, so the damage by the trappers had been significant but not terminal. However, Tinakula is a frequently active volcano. A major eruption wiped out a human settlement there in 1840, and another caused the evacuation of a new colony in 1971. How the doves managed to survive these and several other cataclysmic events is a matter for head-scratching speculation.

Tinakula is a frequently active volcano. A major eruption wiped out a human settlement there in 1840, and another caused the evacuation of a new colony in 1971

Clearly, Tinakula is far from a secure place to repatriate the birds. Moreover, the island has been overrun by Yellow Crazy Ants and Little Fire Ants: two highly destructive invasive species whose impact on the dove has yet to be established. But all the other islands in the Santa Cruz group that Ray has visited are arguably less suitable still, having rats, cats, dogs AND invasive ants. Where, then, might the doves be released? An action plan compiled in 2017-2018 by Ray, aided by Duncan Bolton and myself, identified islands that might prove suitable. However, the report also highlighted how much more work we needed to do: monitoring Tinakula and studying the doves in the wild, generating popular support (vital in the Solomons, where local communities have customary ownership of the land they live on), improving biosecurity and maximising the genetic diversity of the captive population.

The last was soonest achieved. Luis Neves at WRS put forward Jurong Bird Park to house and breed a large proportion of the captive doves, and Jeff Sailer, head of Toledo Zoo, put Joe on his payroll to care for the birds. Even so, it took time, patience and practice to make things happen. Heavy rains, ship rats, biosecurity alarms, veterinary concerns and quarantine arrangements all kept Joe busy in early 2018, while he worked with ECD to allay local and national sensitivities about their birds going abroad. Things were helped by a ringing endorsement of Jurong by Patrick Pikacha, a leading Solomons biodiversity expert, following a visit to Singapore in April.

A loan agreement between WRS and ECD was duly signed on 12 June, confirming that the birds remain the property of the Solomon Islands. Two months later, at WRS’s expense, 60 doves (35 males, 25 females) were flown to Singapore, leaving 50 (41 males, nine females) in Honiara. Simultaneously Toledo Zoo announced a generous (and well-received!) plan for a new facility in Honiara Botanical Gardens both to house the birds in Joe’s care and to serve as a future reception centre for repatriated birds prior to their release in the wild. 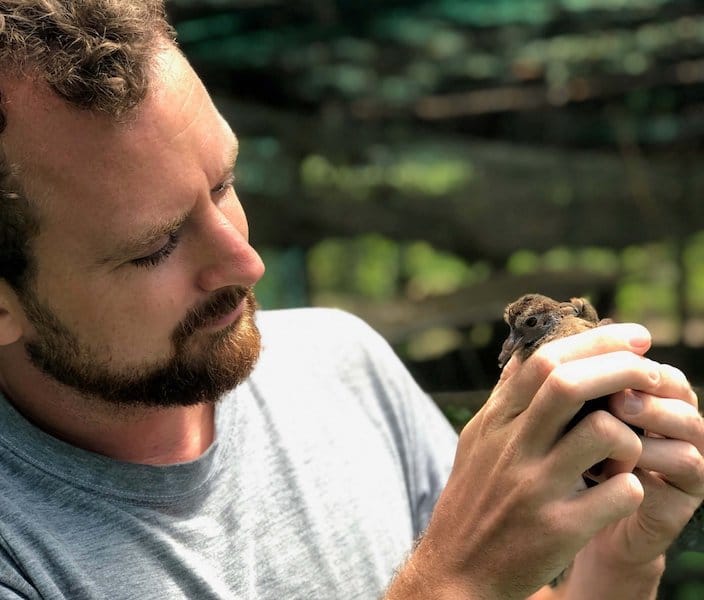 But where will these birds be released? Tinakula remains an option, pending study to determine its condition and the status of the dove population. However, two ethnically different villages on Malo, south of Tinakula, claim land-rights over the volcano, and both have to give their consent to any visits or dove-related activities there. In January 2019 Ruddy Oti, a highly respected figure in Temotu, travelled with Joe to Malo to negotiate for Ray Pierce to conduct a new survey of Tinakula. Whatever transpires, as Ray stresses, biosecurity is paramount: every visit –on average once a fortnight – puts the place at risk from rats.

Meanwhile, we need to identify more islands for potential releases. This is urgent, because already Jurong has had such success (26 offspring) that its available space has been absorbed, and Joe’s Honiara birds have also been reproducing. Toledo Zoo is willing to take some birds, but pressing questions remain. How many animals should we aim for as a captive reserve, both for restocking purposes and to maximise genetic diversity? How will we fund the search for other suitable islands? Who will undertake this tricky endeavour?

Whatever the answers, the Santa Cruz Ground-dove is in a better place than it was two years ago. All the people and institutions that have collectively put it there deserve huge credit for their speed, positivity and professionalism; and with their continuing collaboration this ‘adventure of a lifetime’ is set to run for many years yet.