Tits [or chickadees if you are American] are the feisty acrobats of the bird world. These familiar small songbirds tend to be popular wherever they occur, that is over most of Eurasia, Africa and Northern & Central America. They live in woodland, nesting in holes in trees but foraging for insects and seeds from the canopy down to the ground. These characteristics have allowed many tit species to become common garden birds, using food and nest-boxes provided by humans.

Tits are morphologically well adapted to their life-style. Their short stout bills are capable of tackling tough food items [and delivering painful blows to human fingers]. Those of Great Tits, especially males, become stouter in autumn as they switch from a diet of insects to one of seeds such as beech mast. The acrobatic antics of tits are aided by their short but powerful legs. Many, such as Blue Tits, can hang upside down suspended by just one foot. Tits have short wings with rounded tips, ideal for manoeuvrability in dense foliage but less good for speed. Their flight is weak and undulating, and most species are highly sedentary. This feature, combined with their ready use of feeders and nest-boxes, has made abundant species such as Great Tits and Black-capped Chickadees among the most-studied animal species in the world. 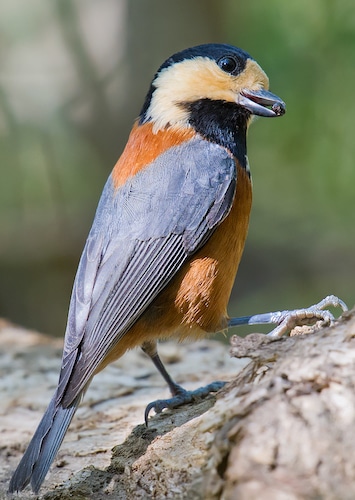 Most tits are strikingly coloured, often in black and white but sometimes with blues, greens and yellows. A few species are drab, notably the Oak and Juniper Titmice of North America which are clad in shades of grey (titmouse derives from Old Scandinavian tittr for a small thing and Saxon máse for small bird but the plural titmice is now well-established). The sexes are usually similar but distinguishable, with males averaging larger in size and brighter in colour. Juveniles are usually duller and often more yellow in colour than adults.

Although most tits are noisy birds, their territorial songs are usually far from musical. The American name ‘Chickadee’ is an onomatopoeic rendition of common calls of three species [Black-capped, Carolina and Mountain Chickadees]. Tits breed as territorial monogamous pairs, with occasional instances of bigamy by males. Most nest in natural holes in trees or holes excavated by other birds, although some [e.g. Willow Tit] excavate their own nests. Any such excavation, and nest building and incubation in all species, is done primarily or only by the female. Tit eggs are whitish with reddish speckling. Both parents feed the brood, which is usually large. Family parties of tits at the end of the breeding season and winter flocks [which in some species can exceed 100 birds] are often joined by other species. Some species, e.g. Chestnut-backed Chickadee of western North America and White-bellied Tit of East Africa, seem to act as particularly powerful magnets.

Until recently, virtually all tits were placed in the same genus, Parus. The two exceptions were two South-East Asian species: the large [nearly Redwing-sized] Sultan Tit with its bright yellow crest, and the Yellow-browed Tit, which looks embarrassingly similar to a leaf warbler until you spot its stubby bill and small crest. A DNA study in 1996 rocked the boat by dividing Parus into no fewer than six genera, a change rapidly adopted by the American Ornithologists’ Union but not by all other checklists. In addition, several taxonomic splits have been proposed since 1995, potentially adding ten new species, although some have not been widely accepted.

The IOC recognise 64 species; they are: