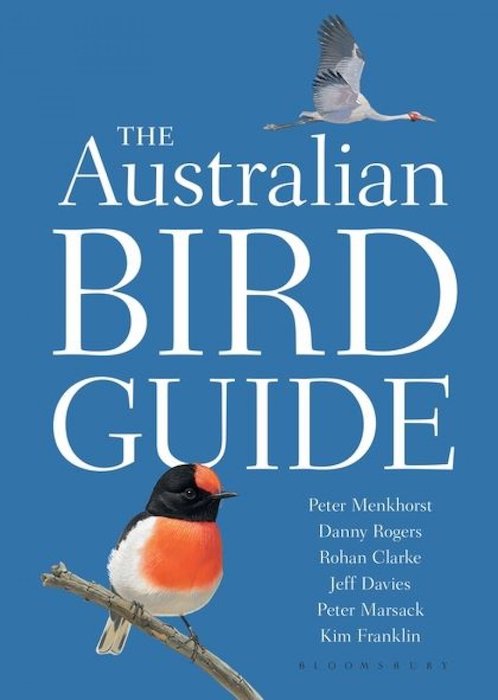 Australia’s avifauna is large, diverse and spectacular, reflecting the continent’s impressive range of habitats and evolutionary history. With specially commissioned paintings of over 900 species, The Australian Bird Guide is the most comprehensive field guide to Australian birds ever seen.

The Australian Bird Guidefeatures around 4700 colour illustrations, with particular emphasis on providing the fine detail required to identify difficult groups and distinctive plumages. Comprehensive species accounts have been written by a dedicated team of ornithologists to ensure identification details, distribution and status are current and accurate.

The Australian Bird Guide sets a new standard in field guides, providing an indispensable reference for all birders and naturalists looking to explore Australia’s magnificent and unique birdlife.

“I was fortunate recently to visit Australia with my family. When a Brisbane-based friend heard we were coming over he advised me to wait before buying a new field guide, as this one was due to be published. This was excellent advice as the new ABG – nine years in the making – is a first-rate field guide, one of the best I’ve seen. […] Should you buy this book if you’ve already got an Australian field guide? Yes, I’d suggest it would be a shame not to. The only (inevitable) downside is its size; it’s a big beast of a book so if you’re planning to do long hikes then maybe go for a smaller guide (or maybe an app version might follow?) Otherwise, it’s worth the extra sweating! Highly recommended.“
– Andy Musgrove, BTO book reviews

Peter Menkhorst became hooked on birding and natural history books when, as a seven year old, he used Caley’s What Bird is That? to identify a New Holland Honeyeater in his garden; he is now a zoologist at the Arthur Rylah Institute for Environmental Research, Victoria. He is author, with Frank Knight, of A Field Guide to the Mammals of Australia (2010), editor and major contributor to the award-winning Mammals of Victoria (1995) and edited two editions of Pizzey and Knight’s Field Guide to the Birds of Australia (HarperCollins). He was awarded the Australian Natural History Medallion in 1998.

Danny Rogers started birding when he was four years old, and regrets those wasted first four years. Any birding is fun, but he has particular interests in the minutiae of plumage, moults and field identification, and in the ecology and conservation of shorebirds. He is Melbourne-based but completed a PhD on shorebirds in Roebuck Bay, north-western Australia and has birded widely in Australia, South Korea, Malaysia and Iran.

Rohan Clarkeis an ecologist and ornithologist at Monash University. A birder since childhood, he has field experience with all but a couple of Australian species. He gets a kick out of birding remote island outposts and leading pelagic excursions to watch seabirds, as both present rich opportunities for new insight and discovery. He has previously authored Finding Australian Birds: A Field Guide to Birding Locations.

Jeff Davies is a lifelong birder who completed a Fine Arts Painting Major at Caulfield Institute of Technology. He has contributed artwork for Freshwater and Estuarine Fishes of Wilson’s Promontory (Fisheries & Wildlife Div. 1983), Shorebirds of Australia (1987), Handbook of Australian, New Zealand and Antarctic Birds and The Penguins (1995). Jeff prefers to work with water-based mediums and commissioned works can be found in private collections in Australia and North America.

Peter Marsack trained as a zoologist but has also worked extensively as a natural history artist and illustrator. He was an artist for the multi-volume Handbook of Australian, New Zealand and Antarctic Birds, and a prize-winner in the inaugural Waterhouse Natural History Art Prize. His collaboration with Canberra naturalist Ian Fraser on A Bush Capital Year (2011) was awarded a Whitley Certificate for regional natural history.

Kim Franklin, BA (Fine Art) has had an interest in birds throughout his life. He has exhibited in Africa and Europe. His illustrations have featured in ornithological books including Handbook of Australian, New Zealand and Antarctic Birds, Birds of the Western Palearctic, Parrots, Raptors of the World, Birds of the Indian Subcontinent and Pheasants, Partridges, and Grouse.

I’m going to keep this short

In Europe ‘Collins’ set the benchmark for fieldguides everywhere and in the US ‘Sibley’ stepped up to the plate. Many country fieldguides have followed and most have kept up the standard giving us birders better guides to may first-class birding destinations.

This year I had my fourth trip planned to Australia to ‘clean up’ those bird families I’ve dipped on before and received this guide before the departure date. Despite having three Australian fieldguide apps on my phone, and despite the weight of this new guide I decided it had to come with me as it is, simply, the best fildguide for birders anywhere; superbly well-written and amazingly illustrated! I say amazingly because each bird is wonderfully depicted, each plate excellently arranged and an incredible consistency given that there are a number of illustrators involved. There is a commissioning editor somewhere who should get a bonus for their choice of those involved in this project.

Then personal disaster struck forcing me to cancel my long-anticipated trip. The only straw I am left to clutch for is the hope that an app, based on this book, will become available should I get that trip back.

Despite my set back I can still be unequivocal… this is simply the best birding fieldguide EVER!