Birds of the West Indies 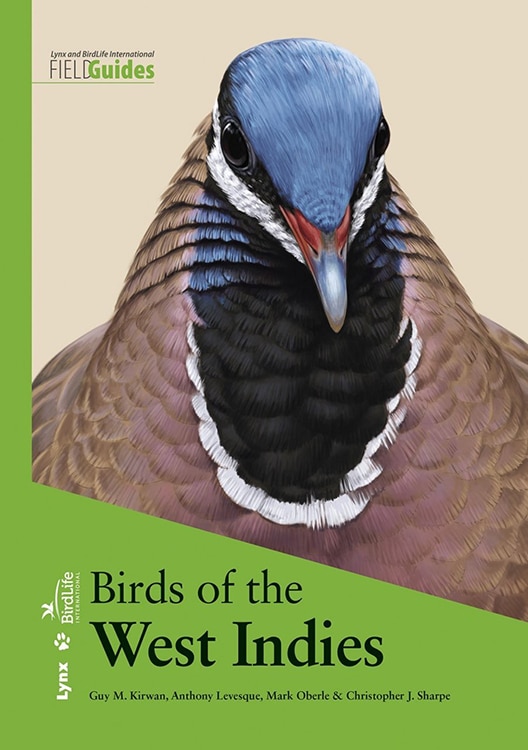 Most people associate the Caribbean with palm-fringed sandy beaches, cricket and rum. Mention the West Indies to birders and they think toddies and tremblers, among a remarkable array of c. 190 endemic species. Furthermore, no fewer than six families are confined to the region, and another (spindalises) virtually so. The region also receives many vagrants from both North and South America, and even transatlantic arrivals from Europe. If this was not sufficient enticement, several of the most poorly known and enigmatic birds in the world – including Ivory-billed Woodpecker and Semper’s Warbler – as well as others requiring further taxonomic investigation offer additional allure.

Features:
Taxonomy follows the HBW and BirdLife International Illustrated Checklist of the Birds of the World.

Over 1600 illustrations covering all species and distinctive subspecies, birds in flight, males and females, juveniles and non-breeding plumages, where appropriate.

QR code for each species, linking to the Internet Bird Collection gallery of photos, videos and sounds.

more than 650 full-colour range maps for all species other than vagrants.

Well-marked subspecies groups receive full accounts, and the distributions of subspecies breeding in the region are clearly mapped.

Guy Kirwan is a freelance editor and ornithologist currently based in the UK but working for Lynx Edicions, following a lengthy sojourn in Brazil. A regular visitor to the West Indies since the mid 1990s, he is currently finalizing a detailed checklist to the birds of Cuba. Author of more than 150 communications in the technical literature, and several previous books, Guy is a Research Associate of the Field Museum of Natural History, Chicago, and the Museu Nacional, Rio de Janeiro; his main avian interests are in taxonomy and the breeding biology of passerines in the New World tropics.

Anthony Levesque arrived in Guadeloupe from France in 1998 after studying Wildlife Management and Nature Protection. Following work at a nature reserve and as a wildlife consultant for the National Hunting and Wildlife Agency, he now owns his own environmental consultancy. An active birdwatcher, he has found more than 50 species new to Guadeloupe, among them many not previously recorded in the Lesser Antilles and, in some cases, the Caribbean as a whole. He is also an eBird reviewer for the Lesser Antilles, and the founder of Amazona – the bird conservation NGO in Guadeloupe.

Mark Oberle is Professor Emeritus at the University of Washington. He trained in biology and medicine at Harvard and Johns Hopkins Universities. Mark has worked in biology and ornithology in the American tropics for four decades, and is a founding member of the Washington Ornithological Society. He has published several books, audio CDs, and a smartphone app for birds of Puerto Rico and the Virgin Islands.

Chris Sharpe is a biologist who has worked on the conservation of Neotropical birds for more than 30 years, having been based for most of that time in Venezuela. He is an editor of HBW Alive and of the Lynx Edicions and BirdLife International Field Guides series.

“[…] For serious birders visiting these islands, Birds of the West Indies will undoubtedly prove to be indispensable, even for visits to single islands in the region. It is compact enough to carry in a small bag, comprehensive in its coverage, easy to use, competently illustrated, and up-to-date. What more could you want?!
– Frank Lambert (23-01-2020), read the full review at The Birder’s Library

“[….] despite the niggles on size and cost, given its other advantages over the previous guides, it is an excellent contribution to furthering ornithology in the region and I would highly recommend it if you’re considering a birding trip to the West Indies.”
– Hugh Hanmer, BTO book reviews

Here is what I said about Birds of Thailand: There is a great deal I like about this guide, and nothing I don’t!

Do I have anything different to say about their guides to Japan, Cambodia or The West Indies? The answer is not a lot.

I very much like the ‘flexicover’ this should preserve the book during field trips and is actually a very sensible use of plastic for once. (I am less enamoured of the fact that the distributer sent this our shrink-wrapped – completely unnecessary planet despoiling.

The consistent use of abbreviations in the compact test saves space and makes those accounts really useful with an idea on calls etc.

Lynx is turning out some first class guides. They are NOT substitutes for some earlier more comprehensive works such as the recent excellent Japan fieldguide that packs a great deal more in… but this is a travelling birders delight; lightweight, durable and covering all the species. Nice little touch including a coded card for buyers who can down load a checklist on line.