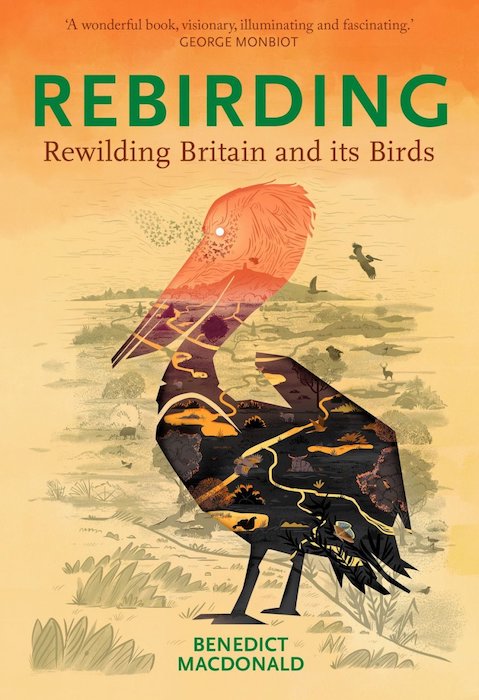 The Publisher’s View: Did you know that 94% of Britain isn’t built upon? That Snowdonia is larger and emptier than the Maasai Mara National Reserve? That Scotland’s deer estates, or the UK’s burned heather lands farmed for grouse, both cover areas twice the size of Yellowstone National Park? That livestock farms occupy 88% of Wales but contribute 0.7% to its economy – and provide jobs for less than 2% of its people?

Britain is blessed with space. Huge areas of this space produce little in the way of viable food supplies. They sustain few livelihoods, and no young people’s futures. We waste space in a way no other nation would allow. The solution is simple: the restoration of our native landscapes, our wildlife – and most of all, our rural jobs. Nature makes money, creates genuine local income, and affords the prospect of a life without subsidy for our dying rural communities.

Rebirding was written as the first book with actual solutions for how beautiful and profitable the UK’s countryside could one day look – as well as why the impending extinction of our cuckoos, turtle doves and honey-bees is entirely avoidable. Britain has all the space it needs for an epic wildlife recovery. So, what’s stopping it from happening in our country – and how can we turn things around?

“This is a wonderful book, visionary, illuminating and fascinating.”
– George Monbiot

“A wonderfully imaginative book which shows how things could be with our rapidly declining areas of countryside, instead of how – despairingly – they are now.”
– Rod Liddle (Associate Editor of The Spectator)2

“This passionate, authoritative, up-to-date and ultimately optimistic book is a worthy comparison to such seminal works as George Monbiot’s Feral and Mark Cocker’s Our Place.”
– Jonathan Elphick, BBC Wildlife

“Rebirding is beautifully written, based on deep, personal experience and a genuine love of the subject. You may not have come across Ben Macdonald before now; but believe me, you will hear a lot more from him in the future.”
– Stephen Moss

“Having read a number of the recent books about rewilding, I was tempted to think ‘Oh blimey, not another one!’. I am now tempted to say ‘they left the best till last […] ”
– Bill Oddie

“A book about a key subject at a key time, passionate and deeply thought-through. Anyone concerned with the future of the natural world in Britain will want to read it.”
– Mike McCarthy (author of The Moth Snowstorm)

“With George Monbiot’s Feral and Isabella Tree’s Wilding, Rebirding sits separate from both and is in fact an essential third book to read if you’ve enjoyed the others. In short, it’s a captivating, fascinating and inspiring read”
– Ed Stubbs, Birdwatch Magazine

“A must read and a good read […] the type of book that grabs and keeps my attention. You should read it and I think you may well enjoy it a lot.”
– Mark Avery

“This is a stimulating and important book, beautifully written and well researched […] It provides a compelling vision for the future”
– Carl Jones (Chief Scientist, Durrell Wildlife Conservation Trust)

The Author: Benedict Macdonald is a conservation writer, field director in wildlife television, and a keen naturalist; passionate about restoring Britain’s wildlife, pelicans included, in his lifetime.

During his extensive global travel experience, Benedict has found inspiring examples of why desecrating our country’s ecosystems is both entirely avoidable and against the national interest. This book is his attempt to ensure that this generation, for the first time in thousands of years, leaves Britain’s wildlife better off, not worse, than the generation before – for wildlife and people alike.

Benedict is a long-time writer for Birdwatching magazine, as well as a contributor to the RSPB Nature’s Home and BBC Wildlife. He has been fortunate to work on TV series for the BBC, Apple and Netflix – most notably the grasslands and jungles programmes of Sir David Attenborough’s conservation series Our Planet: broadcast worldwide on Netflix in April 2019.

This is most definitely my book of the year and possibly the whole decade!

Regular readers will know I rarely gush and that is usually over the writing skills of authors and not content. This is an unashamed gush for content with an appreciative nod to its very accessible prose and light but deadly serious style.

Somewhere along the way Ben quotes an old Japanese Proverb: Vision without action is a daydream. Action without vision is a nightmare! This book is more than a daydream, it’s a vision with a clarion call for action and, unlike most of its precursors this gives a very clear timetable and checklist of actions. In a sense it is full of hope despite the gloom cast by climate change and our increasingly ‘tidy’ human world.

I can pick out a few of its important messages but this has to be the one book you read this year if you read no other, as its messages are myriad and its import undeniable.

The vision is of a British landscape returned to nature but adding to the economy. It marries the simple truth, that a massive amount of our land produces a miniscule return to the economy and employment, with another, that we Brits love nature and will pay handsomely to see it. Taking unproductive land that adds little wealth and few employment opportunities like driven grouse moors and sheep clad hills, and re-introducing the original animal ‘stewards’ (or as close as we can get with modern beasts) at the right densities and leaving them to their own devices will bring back our heritage of a patchwork of woods, scrub, meadows and wetlands.

Stopping our insane idea of minimalist ‘tidy’ verges and parks and allowing nature to manage itself will result in us getting back many of the insects, birds, reptiles, amphibians and mammals that are lost or soon to be extirpated.

Using beaver and boar, ancient ponies and cattle can create the right conditions for this bloom without the expense of conservation management and subsidies.

This and so much more brings to the fore lessons currently being learned by high profile re-wilding schemes like the Knepp Estate where iconic birds like Nightingale and Turtle Dove have bucked the national trends and then some.

This book is a life changer and if we get off our collective backside and scream its messages loudly enough we really could change the entire face of Britain for the better.

Buy it, borrow it, but above all read it, and when you have, add your voice to its call for natural salvation