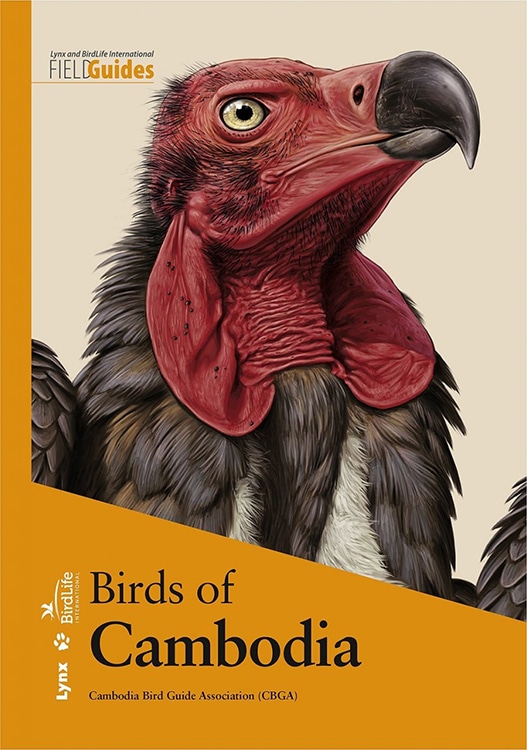 Sandwiched principally between its better-known neighbours of Thailand, to the north and west, and Vietnam, to the east, the relatively small and comparatively low-lying country of Cambodia is dominated by the vast combined floodplains of the Tonle Sap (or Great Lake) and lower Mekong River. Unsurprisingly then, its principal attraction for birdwatchers is a suite of exceptionally scarce birds associated with wetlands and grasslands. Spearheading the list are the iconic Giant and White-shouldered Ibises, both of which are Critically Endangered, and a trio of almost equally rare vultures, including the iconic Red-headed Vulture. These rarities are the subject of an ongoing international conservation effort. The supporting cast includes Bengal Florican (also Critically Endangered), Sarus Crane (Vulnerable) and Mekong Wagtail (Near Threatened). Despite boasting just two endemic species, Cambodian Laughingthrush and the very recently described Cambodian Tailorbird, the latter’s discovery in the environs of the country’s capital Phnom Penh perhaps more than anything epitomises the potential to make cutting-edge ornithological findings in this still relatively under-explored nation. Birds of Cambodia offers the perfect introduction to the country’s varied avifauna.

Features
– Taxonomy follows the HBW and BirdLife International Illustrated Checklist of the Birds of the World.
– 636 species; 16 endemics or near-endemics, 2 introduced, 55 vagrants.
– Detailed texts covering status, habitat and behaviour, age, sex and geographical variation, voice, and confusion species.
– Almost 1400 illustrations covering all species and distinctive subspecies, birds in flight, males and females, juveniles and non-breeding plumages, where appropriate.
– QR code for each species, linking to the Internet Bird Collection gallery of photos, videos and sounds.
– Close to 600 full-colour range maps for all species other than vagrants.
– Well-marked subspecies groups receive full accounts, and the distributions of subspecies breeding in the region are clearly mapped.
– Local species name included.

“[…] This book contains everything you would want for a trip and once again Lynx have found a need and satisfied it.”
– Keith Betton, British Birds 113, April 2020

Here is what I said about Birds of Thailand: There is a great deal I like about this guide, and nothing I don’t!

Do I have anything different to say about their guides to Japan, Cambodia or The West Indies? The answer is not a lot.

I very much like the ‘flexicover’ this should preserve the book during field trips and is actually a very sensible use of plastic for once. (I am less enamoured of the fact that the distributer sent this our shrink-wrapped – completely unnecessary planet despoiling.

The consistent use of abbreviations in the compact test saves space and makes those accounts really useful with an idea on calls etc.

Lynx is turning out some first class guides. They are NOT substitutes for some earlier more comprehensive works such as the recent excellent Japan fieldguide that packs a great deal more in… but this is a travelling birders delight; lightweight, durable and covering all the species. Nice little touch including a coded card for buyers who can down load a checklist on line.