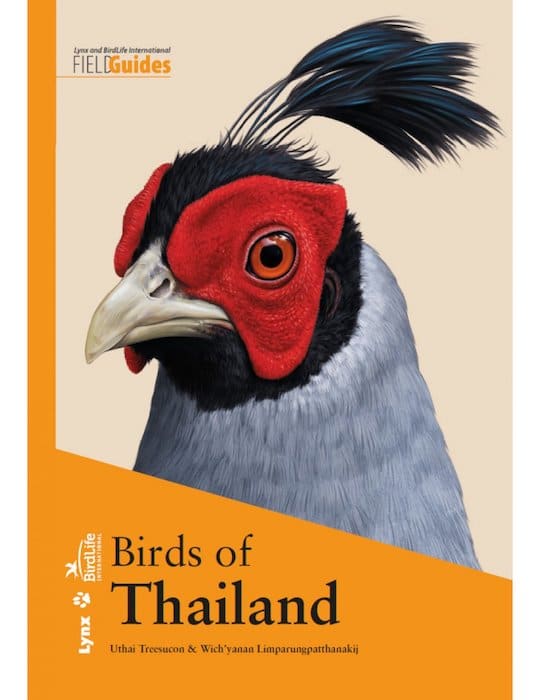 Thailand is justifiably the most popular country for birdwatching in South-East Asia. From dramatic hornbills and colourful but skulking pheasants and pittas to one of the rarest birds in the world, Spoon-billed Sandpiper, the country boasts year-round interest. This new field guide will help you identify all 1049 species to have been recorded in the country to date, including the 20 species endemic or near-endemic to Thailand.

– Taxonomy follows the Handbook of the Birds of the World and BirdLife International Illustrated Checklist of the Birds of the World.
– Detailed texts covering status, habitat and behaviour, age, sex and geographical variation, voice, and confusion species.
– Almost 2200 illustrations covering all species and distinctive subspecies, birds in flight, males and females, juveniles and non-breeding plumages, where appropriate.
– QR code for each species, linking to the Internet Bird Collection gallery of photos, videos and sounds.
– More than 1025 full-colour range maps for all species other than vagrants.
– Well-marked subspecies groups receive full accounts, and the distributions of subspecies breeding in the region are clearly mapped.
– Local species name and local conservation status included.

After graduating with a Master’s Degree in Biology (Environmental Biology), Uthai Treesucon worked as a wildlife researcher at Mahidol University (Bangkok, Thailand). He led his first birding tour in 1983. He is an expert on identifying birds by their calls. Birding has taken him to more than 40 countries. Apart from Thailand, he has led birding tours to Vietnam, Myanmar and Borneo. Uthai is a former chairman of the Bird Conservation Society of Thailand (BCST) and still does voluntary work for the Society and is a member of the BCST Records Committee. He lives in Bangkok.

Wich’yanan Limparungpatthanakij graduated with a Master’s Degree in Biology from Mahidol University (Bangkok, Thailand), focusing on the ecology of avian mixed-species foraging flocks. He is a member of the BCST Records Committee and an eBird reviewer for Thailand. He has been involved in a number of ornithological and ecological research projects in Thailand, as well as being a freelance guide specializing in bird tours throughout the country, and an active volunteer for conservation NGOs.

There is a great deal I like about this guide, and nothing I don’t!