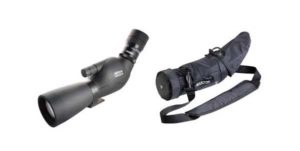 The MM3 GA ED series is the latest evolution of the popular travelscope concept pioneered by Opticron 20 years ago with the original Mighty Midget. Combining all the things that have made Opticron travel-scopes the #1 choice for so many wildlife observers over the years, the MM3 50 & 60 GA ED have been designed and engineered to deliver the company’s maxim of “smaller, lighter, brighter, sharper” to a new generation of spotting-scope users.

Constructed from polycarbonate and lightweight alloys, the super-compact optical system creates a body only 205mm long (50mm) and 252mm long (60mm). At 600g (50mm) / 730g (60mm), without eyepiece, an MM3 GA ED weighs around the same as pair of 42mm binoculars and can be used without a support for crystal clear flat field observation at magnifications below 20x. Unlike binoculars, an MM3 GA ED continues to deliver stunning clarity and definition up to 36x (50mm) and 45x (60mm).

Compatibility with the full range of HDF and SDL eyepieces means existing field-scope owners can use their eyepieces with a new MM3 GA ED body.

Fully rain and dust proof and protected against knocks and bumps with full-body rubber covering, the MM3 GA ED is available in straight-through and 45° angled bodies to suit different applications.

Features and specifications at a glance:

We had been invited by Desert Watch Lanzarote to visit and assess the island as a birding destination mostly funded by the tourism authority and a local council. I have said to my partner (in every sense) that we should try and travel light when we go off on a birding jaunt. This time she (and I) resolved to pack far less clothes as we would be staying in a villa with a washing machine. We also decided that taking my large scope and tripod was also unnecessary, especially as Desert Watch Lanzarote and Lanzarote Active Club’s leading light, Carmen Portella had said she could lend me her spare tripod. Given that my 80 scope is, with zoom eyepiece almost twice as long 400 mm, and weighs more than twice as much at 1675 grammes, this would give us more space and appease ‘hawkeye’.

So I approached Opticron to see if they could lend me a ‘travel’ scope, which proverbially would kill two birds with one stone and offer something like the quality I was used to.

They readily agreed telling me: “The 60mm is the big brother to the 50mm and is most often purchased by people looking for high quality compact scope to use for patch birding, domestic trips to Norfolk and suchlike plus the occasional overseas trip. They plump for the 60mm because of the higher magnification. It’s 45x vs. 36x.”

My first use was on the first day of my trip… on some ‘waste’ land behind our villa, but, of course, I had already benefited from the lighter weight and compactness when packing (and carrying) our bags. Already pleased with that I wanted to see what I was giving up in order to travel light.

The short answer is, not as much as I thought I would. The first day, like the majority of my birding was at relatively short range and on targets that were in small numbers. This is important because if I had been watching vast wetlands with thousands of birds it would have been harder to find one bird amongst many and then zoom in on it. I was losing a lot of field of view, but I didn’t need it to be there.

Watching passerines through my binoculars was fine and then a saw a movement a good deal further away when a stray do disturbed a bird. As my immediate ‘jizz’ speculation was ‘stone curlew’ I certainly wanted to see the target. The bird moved again and I was straight on to it with the scope. Like my later birding I found the field of view more than adequate. I was enjoying looking at the stone curlew when another came into view. This was a great test as the birds were at either side of my FOV and I saw no significant colour or clarity distortion. Nice sharp views allowed my a good long look at the (eventually three) birds. I guess this was around 200 yards away, so close enough on a large bird to get ID through the bins, but much better scoped to reveal all the fine detail.

The only time I was really aware of the smaller field of view was a day in the desert following a moving bustard in the early evening with the light beginning to fade. In low light I do think I lost some detail and with a smaller image it was harder to keep the bird in my view as it moved along.

Not a scope I’d want to do sea-watching with at home where long distance combined with poor light is virtually the norm. But scanning the sea for shearwaters was possible, if rather fortunate that the one and only Cory’s I saw wasn’t too far out.

I visited a minuscule wetland where a few gulls, terns, herons and waders can be seen and the scope coped. With dark grey rocks and rather dark grey waders I was aware that it was, at times, hard to pick out birds, but once in view the watching was certainly good enough to not string fairly distant Common Ring Plovers into their scarcer Kentish cousins.

Both my partner and I found the scope more than adequate and a good option. In the pasty I’ve carried my large scope around the world and, at times, used it so briefly in a whole trip as to not justify its inclusion, I wish I’d taken this MM3 as the light weight and compactness would have more than made up for any shortcomings.

We agreed that we most liked the double focusing wheel. First get the bird more or less in focus with the closer wheel, then fine tune with the further one. Great idea! The zoom was smooth and easy too. This got tested out scoping falcons at the top of a cliff in windy conditions and did the job although keeping the whole thing steady was difficult, but I’ve no doubt any scope would have struggled.

The overall ‘feel’ of the scope is good with the grey rubber feeling good, offering protection and, as it happened where I was, blending with the surroundings.

Our biggest bugbear was the ‘stay-on’ case. In the end it didn’t, we took it off. Focusing was a bit of a pain when the case got in the way. Had we been birding in sea-spray or rain we would have had to manage but as we didn’t need it it was certainly more comfortable to use without the case.

Overall verdict was very favourable. I’d not give up my scope anywhere at home, but readily swap to using the MM3 for overseas trips. Would I take it to overseas wetlands and for long-distance viewing there? The answer is very probably as the weight and size advantage outweighs any shortcomings for short term use. Now I need to search for a really lightweight tripod that packs down in a compact way!

Buy this telescope from Opticron