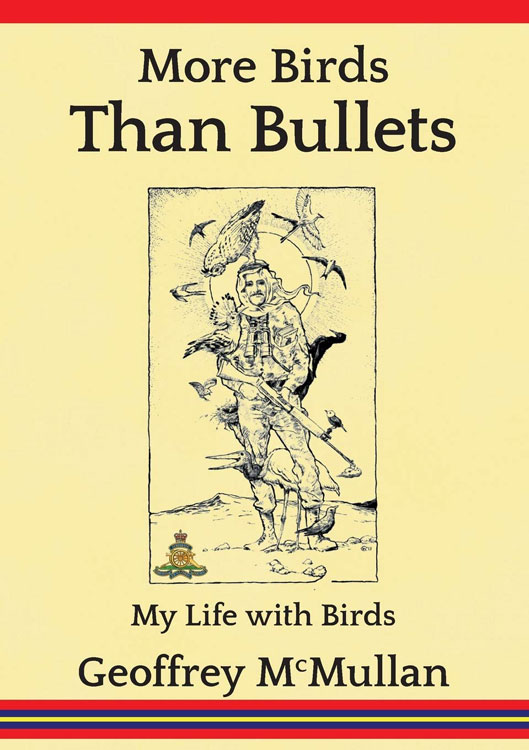 ‘More Birds Than Bullets’ is not just as the title suggests, there is more to it than that, it can be seen as a metaphor for life’s experiences. I struggled with how I should go about writing it, should it be factual, or should it be like a novel? In the end I decided to write about my experiences from my time in the army through to civilian life, I have included some facts about birds, and rather than write out a long list of the birds I have seen, I concentrate instead on a small number of birds in slightly more detail…

My aim is to give you an insight into my world as a birder, the stories are true and based on my experiences. I have changed names to protect people, unless it shows them in a good light as it’s not my intention to cause harm to anyone. I will share with you some of my background and my relationship with birds, people, and the countries I have visited, and how they formed my understanding of the world by concluding with my transition from civilian, to military and back to civilian life. I hope you find it amusing, informative.

This sort of autobiographical ‘birding life’ is always enjoyable to read. We birders like to talk about the birds we’ve seen, and even those we ‘dip out’ on and that is just what this book does.

The author spent 22 years in the British Army based in Germany where he helped establish a reserve as well as serving overseas in several conflicts and peacekeeping tours and other areas of the globe with an army presence. He also spent many leaves getting to grips with world birding.

The book is a series of tales much as one might tell them around a campfire or over a few pints after a hard day’s birding. Like most of us the author has his favourite species, principle of which are woodpeckers and he is on a quest to see as many of them as possible.

That I read it cover to cover demonstrates its interest to any birder.

Having said that there are a couple of shortcomings which a good editor would have pointed out and, I am sure would have encouraged the author to take on, over and above the need for copy editing to remove some of the typos.

First and foremost is the rather haphazard narrative. I think a straight chronology would have held it together better. I’m not one for dates and times, but the progress of year on year and how one changes with those times is familiar and makes it easy to follow. Sometimes the scene can switch from Belize to Britain or Gambia to Germany, which does confuse the reader, as do to many chronological shifts.

I also found the inconsistencies around, or repetition of army terms distracting. Sometimes terms that are obvious are explained while less familiar ones slip by with no explanation or we find the same explanation again down the road. Note to author, in your next volume deal with these in a glossary.

More birding goes on with very little talk of the bullets and, while I’m a birder and want to know about his pursuit of them I’d have like to know a bit more about his service life too. They are mostly glossed over, which, while understandable disappointed me. His personal struggles are also clearly very important to his life changes and I’d liked to have travelled along that road more too. Where he lets you into that inner self its very honest even if it puts him in a harsh life, but it’s a little thin.

Having said that there is enough to sustain the reader throughout and more than enough to make one envy some of the birds and places he has seen. I recommend you join him on that journey.