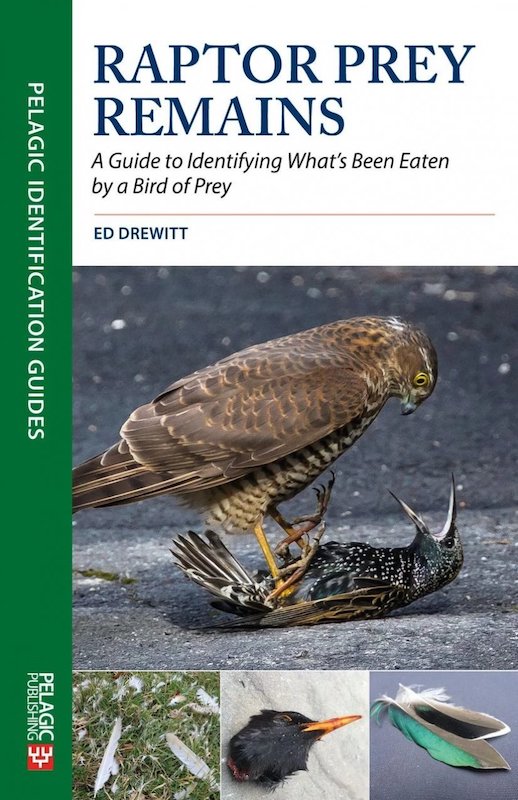 Are you curious about the remains of an animal you have found? This compilation of the most likely found body parts of animals eaten by raptors will help you identify your discovery. Including over 100 species of bird and mammal prey of raptors such as sparrowhawks, peregrines and hen harriers, this photographic guide highlights the common feathers, fur and other body parts found at raptor nests, roosts, plucking posts and other opportunistic spots.

Discovering what raptors eat is an important part of confirming their feeding ecology and how this might change over time, vary on a local level or in response to changing prey populations, as well as dispelling myths and assumptions about what certain raptors species eat. Diet studies are vital for the conservation of raptor species; the more we know about what they need for survival the more we can predict and plan long-term for the protection and survival of raptors that may be vulnerable and in decline.

This is the first book to show in detail the actual parts of a bird, mammal or other animal that you are likely to find in a garden, woodland or beneath a raptor roost. As more people take an interest in raptors and watch species such as peregrines via webcams and through watch groups, there is greater opportunity for finding prey remains. Raptor Prey Remains provides the first and most important step in identifying a prey species.

Ed Drewitt has been collecting feathers and skulls since he was seven years old and studying the diet of urban peregrines for over twenty years. He has a good eye for identifying even the tiniest of feathers and has learnt which body parts we are most likely to find after a raptor has fed.

I guess unless you are an ornithologist this is quite a niche volume. It is also a bit short on the question I most ask when I see prey remains, and it’s ‘what bird did that?’ rather than ‘what is that the remains of’. There are a few opening pages that give some inkling, I’d have liked more.

Nevertheless, it is certainly interesting to see the resultant feathers and other remains, and, from that to be able to use this book to see the bird breakfast some passing sparrowhawk or peregrine has had.

The photos are good and necessarily explicit. The text brief but helpful. As far as I know its unique and so to be a welcome addition to serious birders’ bookshelves.