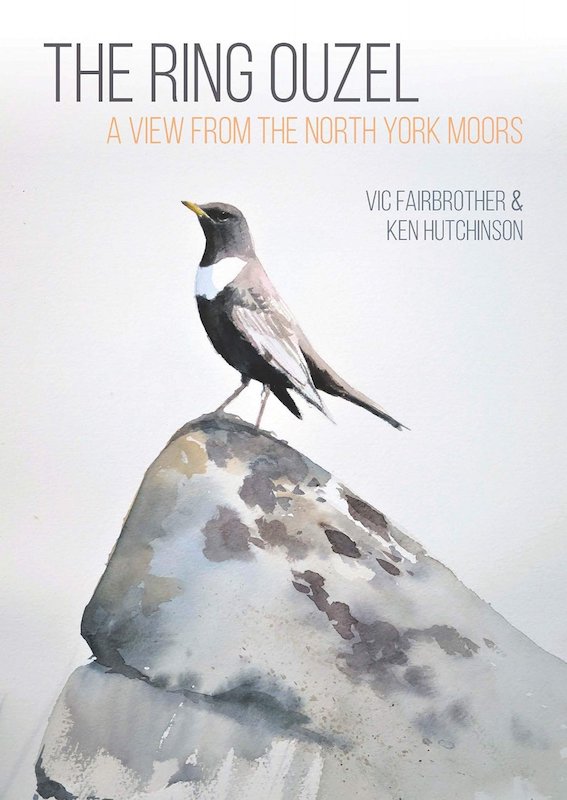 Using vivid extracts from field notebooks and profusely illustrated with photographs as well as paintings and sketches by wildlife artist Jonathan Pomroy, the reader is transported to the beautiful North York Moors National Park. We can share in the excitement as the first Ring Ouzels of the year return from their winter quarters in North Africa, witness their courtship displays, the establishment of territories and the female ouzel painstakingly building her nest and laying her eggs. This is followed by the monitoring of the hatching and fledging of chicks and the levels of predation noted in order better to understand the productivity and sustainability of this vulnerable and isolated population.

To hear the song of the Ring Ouzel carrying for a surprising distance across the high moorland in the early morning is one of the many delights of upland Britain. The authors have recorded and analysed both simple and complex songs in their study area and, following comparison with recordings from Scotland, Derbyshire and the Yorkshire Dales, have confirmed the suspected presence of local dialects.

Crucially this book is much more than a remarkable record of twenty years’ fieldwork as it builds on earlier research elsewhere and relates local findings to the results of other current studies in England, Wales and Scotland. The contraction in distribution and number of Ring Ouzels breeding in Britain, the work of the Ring Ouzel Study Group, the introduction of conservation measures and the potential impact of climate change are all described. Attention is drawn to the first indications of Ring Ouzel decline in Switzerland.

As a migrant, the Ring Ouzel faces additional pressures and problems on passage and conditions in their wintering areas in the Atlas Mountains of Morocco are described. The importance of Britain as a stop-over and refuelling area for Fennoscandian birds on passage in Spring and Autumn is stressed. There is still much to learn and the early attempts to track Ring Ouzels on migration from Scotland to North Africa and back are described. This milestone publication brings the Ring Ouzel into sharp focus for the first time.

…This is an invaluable book on a very important, but relatively little-known, species by two remarkably enthusiastic fieldworkers in a part of the country renowned for its beauty. I hope you enjoy reading it as much as I have.

Being on the southeast coast Ring Ouzels are birds I am lucky to see in any year on passage. I’ve only ever seen them during Autumn when, I learn from this book, they are probably Scandinavian birds rather than those that bred in the British uplands. In my many decades of birding I’ve seen one breeder on the tops apart from those seen in other parts of Europe. For me, therefore, they are a bird of mystery. Many mysteries are well revealed in this book which is a labour of love by amateurs in the best tradition of ornithology. Such people have probably added more to ornithology than all the professionals ever did. The amateur tradition ought to be called the unwaged scientific tradition as meticulous record keeping and honest reporting are very much of what this is about and their efforts are at least as well researched and employed as any paid colleague.

Moreover, this is a beautifully illustrated book with many functional photos and peppered with superb watercolours.

The well written prose is often full of observation so succinctly and poetically put across as to evoke my own memories, such as once trying to locate a constantly calling ring ousel at midnight on a Swedish hillside.

Any birder will enjoy this book, and anyone with a serious interest in Ring Ouzels will need to refer to it often.