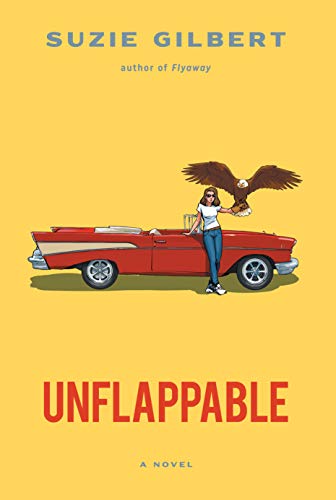 A darkly funny and sexy debut novel from Suzie Gilbert, readers race north from Florida with wildlife rehabilitator Luna Burke and Bald Eagle Mars. The two of them are aided by an underground railroad of wildlife lovers, and hot on their heels are Luna’s soon-to-be-ex-husband and the authorities. Will they make it to the eagle sanctuary in Canada?

A laugh-out-loud and suspenseful road trip, Unflappable has been described as Carl Hiaasen meets Thelma and Louise. It’s about grappling with the past and escaping the ties that bind you, and Gilbert hopes this story of liberation will resonate with readers.

“There are all kinds of cages, whether you’re human or animal,” she explains. “In the beginning, Luna is trapped by her marriage, her past, and her inability to communicate her emotions. This 2,300-mile odyssey frees her in all kinds of ways.”

Gilbert’s first foray into fiction illuminates the true-to-life, cross-country network of nature lovers licensed to care for injured and orphaned wildlife. “The wildlife rehabilitator connection is real,” explains Gilbert, a bird rehabber herself. “We’re all connected through the internet. We swap information and make each other laugh when things go very wrong.

“I wanted to show our strange world – the work, the cost, the emotional toll. But I also wanted to share the joy we feel when we help an injured animal come back to life, and the mind-boggling lengths to which we will go to support each other.”

In fact, Gilbert had to draw on her own network to write Unflappable. “I only rehab birds, so I had to do research and call my mammal rehabber friends. I didn’t know the set up required for a black bear, or how high a Florida panther can actually jump.”

Suzie Gilbert lives in New York’s beautiful Hudson Valley. She has worked with wild birds for nearly 30 years and notes that her quest is “to raise awareness of how humans and wildlife can coexist in better ways.” She is the author of Flyaway: How a Wild Bird Rehabber Sought Adventure and Found Her Wings (HarperCollins); a children’s book, Hawk Hill (Chronicle Books). Her debut novel is Unflappable.

“No writer captures the wild and reverent soul of wildlife rehabilitators like Suzie Gilbert. Unflappable is a thrilling tale of heedless, consuming, undeterred love.”—Mike Bergin, founder of 10,000 Birds

“Fast-paced, crisp, smart, and passionate, Unflappable took me on a road trip unlike anything I’ve read before. Full of laugh out loud moments, it’s a comic, romantic suspense story about how animals help us find the greatness within ourselves.”—Sy Montgomery, author of The Soul of an Octopus: A Surprising Exploration into the Wonder of Consciousness and The Good Good Pig

“In times of emotional stress, one thing that helps many to cope is disappearing into the pages of a novel filled with interesting, quirky characters playing out a rollicking, adventurous plot—a novel such as Suzie Gilbert’s Unflappable.”

“Unflappable by Suzie Gilbert is up there with the best of Carl Hiaasen, and in lots of ways is similar in style and humor. It’s a perfect tonic for quarantined, bored, depressed wildlife lovers—and for anyone who appreciates good, crisp storytelling.”

“Unflappable is a wild ride—literally. It’s the adventure you didn’t know you needed. Hope and hilarity resonate throughout this marvelous, crazy story of love and escape.”

I don’t read much fiction and when I do it tends to be escapist SciFi. I have read a few ‘birder murder’ books authored by several US writers and a few UK ones too, notably Ann Cleves of ‘Vera’ TV fame. It’s a solid enough, if small genre which I’ve mostly enjoyed but never gone out of my way to sample.

Had I now been approached by an old friend who used to send me birding titles from a prestigious publisher I’ve no doubt ‘Unflappable’ would have passed me by too.

I have to say I am most grateful as I read this novel avidly because of the birdy background but with increasing pleasure. It whips along at a fast-enough pace to keep me with it and was a thoroughly enjoyable read.

I’ve not got a lot to say that hasn’t been said already… it’s a romp, part conservation flagship, part romcom and part ‘road movie’ with a dash of sex and politics all based on wildlife rehabilitation which the author knows well.

It gives great hints about the disdain capitalism has for conservation and carries with it a fear of regimes like the current US government that can undo in months what has taken decades to establish like the protection of habitats and species.

Read it because you are ‘woke’, but enjoy its unconventional characters and sweet romance, its classic cars and majestic avian cast too.

A Conversation with Suzie Gilbert, author of Unflappable 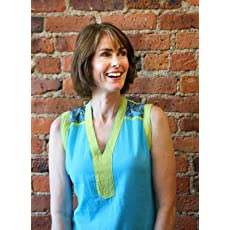 Twenty-five-year-old Luna Burke is risking everything to smuggle a homicidal Bald Eagle out of her husband’s private zoo in Florida, reunite the bird with its mate, and get them both to an eagle sanctuary in Canada. Trying to stop her is her furious husband and the authorities and helping her is a smitten tech guy and an underground railroad of fellow wildlife rescuers. It’s a funny, suspenseful road trip, but it’s also about grappling with the past and escaping the ties that bind you.

All types! I hoped readers would look at the cover, read the description, and be intrigued by something they hadn’t seen before. When my agent sent it to the big publishing houses, all of them kept looking for a similar book but couldn’t find one. When I said, “It’s more like Thelma and Louise,” they said, “That’s not a book.” When I said, “It’s like Carl Hiaasen, but darker and nobody gets murdered,” they told me I needed to kill off one of my characters. No one would take a chance on something that hadn’t been done before. I sent it to a bookstore owner, and she said, “I’ve never read anything like this. Where can I get it?” This is why I’m self-publishing!

One day I was talking to my agent, Russell Galen, and I told him a funny rehabber story. He said, “If I were a movie producer, I’d be all over that. Why don’t you write it as a novel?” I said, “Because I don’t know how to write a novel.” He said, “Figure it out. Read Carl Hiaasen.” The rest is history, although it took four completely different drafts because I really didn’t know what I was doing.

A lot. But I only rehabbed birds, so I had to do research and call my mammal rehabber friends. I didn’t know the set up required for a black bear, or how high a Florida panther can actually jump.

I did, but I wanted him to be a bird, and the kind of bird everyone recognizes whether or not they’re into nature. I hoped the story would also appeal to people who just enjoy a fun and fast-paced adventure story.

The story of smuggling an eagle to Canada is fiction, as it would be far too stressful even for a bird used to being around people. The rehabber connection, though, is very real. We’re all connected through email and listservs, and we all swap information and provide each other with moral support. Just like Luna, I’ve never met some of my best rehabber friends in person.

I can’t write stories that are unrelentingly grim. I just can’t take it. I come from a family where the worse the situation, the faster and more furiously the wisecracks fly, so I suppose I’m hardwired to look for humor. I certainly don’t make light of a bad experience, but I do alternate between comedy and tragedy, and look for those small beams of light.

In the beginning, Luna is trapped—by her marriage, her past, and her inability to communicate her emotions. Her 2,300-mile odyssey frees her in all kinds of ways.

I always have fun writing comic scenes, especially with characters like Warren and Wizzie. I love when characters just do what they do and exasperate everyone around them. My favorite quote wasn’t comic, though. It was when Hélène says to Ned, “And when the stakes were the highest, you raised an eagle on your glove.”

Ugh! This was part of my vertical learning curve of self-publishing. The first time I had the book professionally formatted, it came out to 420 pages. I called a reader friend and said, “If you spotted a cool cover in a bookstore and the story looked like fun but it was a first novel and 420 pages, would you buy it?” She said, “Don’t be ridiculous!” I couldn’t remove entire scenes, or the plot would have fallen apart, so I had to go sentence by sentence. It’s a much better book, but I almost went blind doing it.

They don’t realize the work that goes into it, how much money it costs, or the emotional toll it takes. But the flip side is the incredible joy we feel when we help an animal who would have died come back to life, then watch it run or fly away.

There are so many! But one in particular did not even involve contact with an animal. The first time I went to a wildlife rehabilitators conference, I walked into an enormous dining area filled with rehabbers. They were all eating lasagna and talking about the kind of animal medical issues that would send most people running from the room. I thought, “Finally! I’ve found my tribe!”

The love of wildlife and the outdoors, and the themes of hope, resiliency, and making unexpected connections with other people.

So hard to say! Definitely the most difficult was Unflappable. Each time I finished a draft, I’d send it to my agent Russ. He would tell me all the things he loved about it, then he’d list the things that weren’t working and send me back to the drawing board. There were times I thought I’d never complete it.

I’m a fan of so many different types of writers, perhaps that’s why it’s hard to categorize Unflappable. I love the humorous, animal-based storytelling of Gerald Durrell and James Herriot. I love Zora Neal Hurston’s gorgeous language. I love Rachel Kushner’s The Mars Room for its black humor, and anything by Sy Montgomery because you absorb so much information while you’re mesmerized by her prose. I love Kurt Vonnegut for his sheer attitude. And, of course, Carl Hiaasen because he unintentionally taught me how to write a novel.

Hell on wheels! I am not a computer person nor a natural on social media, and self-publishing requires an enormous amount of both. Early on I hired a publicist, Jessica Pellien, who was (and continues to be) a godsend and my guiding light. The good thing about self-publishing is that I’m my own boss. Ultimately it has been incredibly satisfying and exciting.

Not sure! Maybe a sequel to Unflappable. I picture all those characters just chilling out, waiting to be unleashed again.